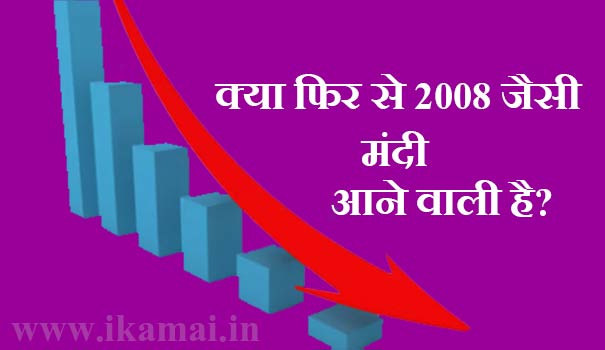 The crisis of Corona has shaken the economy of the whole world. Ever since the era of Corona crisis has started in the world, the possibility of most of the world’s economies going into recession has increased. And the war between Russia and Ukraine has added to this threat. This is the reason that now market experts believe that after just a few months, the world’s markets may see a recession like 2008.

Even though the fight is going on between two countries, but since this war has started. Since then its negative impact is being seen on the economies of the whole world. This war has created a new supply crisis in front of the already sluggish economies due to Corona.

The war has affected the supply chains of countries in Asia including America, Europe. This is the reason that now market experts are feeling that once again a recession like 2008 can knock in the world markets.

Till here Elon Musk, the world’s richest industrialist is also worried about this apprehension, and uncertainties continue in the Indian markets as well.

What is an economic recession?

But when the country’s economy stagnates for at least three consecutive quarters, unemployment starts increasing in the country, inflation starts rising, people’s earnings start decreasing more than expected. So this situation is called economic recession.

Which countries will be hit more by the recession?

Various institutions and firms working in such a field have alerted the world markets about the recession. It has been said in a report that within the coming one year i.e. within 12 months, most of the economies of the world will be in the grip of recession.

Further in this report it has been said that the central banks of the world are adopting strict policies to curb inflation, and the cost of living which is increasing day by day. This is what is pushing the world markets towards recession like 2008. And the big economies of the world like America, Japan, South Korea, Canada, Australia, Britain, etc. are increasingly at risk of falling into recession.

Strict policies of central banks are also leading towards recession.

These days, when the supply chain around the world is disrupted, when inflation has reached its peak. So at this time strict policies are being adopted by the central banks all over the world, so that they are able to control inflation by any means. But the positive impact on the economies is not visible due to their strict policies.

Different countries will be affected differently by recession

According to the report, right now the world is not going to get rid of inflation. And now its pressure is visible not only in the commodity market, but also in the job sector. According to the same report by Nomura, inflation in America is breaking the record of the last 40 years. It is meant to say that in the last 40 years there has not been so much inflation in America as it is now.

If Russia stops gas supply, the whole of Europe may fall into recession

In the same report, it has been said that in the midst of the Russia-Ukraine war, the way European countries are seen making rhetoric against Russia. Such statements may have adverse effects in the times to come. And if Russia decides to take any action against European countries such as stopping gas supplies. So the whole of Europe will not be able to save itself from falling into recession.

It is expected that within the coming one year, the economy of European countries may see a decline of up to 1%. And countries with strong economies such as Australia, South Korea, Canada may see an adverse effect of increasing interest rates. It is even being estimated that the economy of South Korea may decline by 2 to 2.5% this year.

What will be the effect of economic slowdown on India

According to the report, India’s market will also not remain untouched by the economic slowdown. But the impact of this slowdown is expected to be less in large markets like India and China compared to European countries. The report believes that China will be able to deal with the economic slowdown on the basis of government policies. But the impact of Kovid 19 on China is likely to continue.

The Indian rupee is also depreciating against the dollar, and is currently at the lowest level. But despite all this, the report believes that India will be able to deal with the economic slowdown.

What will be the condition of the stock markets

The same report also talks about the stock markets. In which it has been said that there is an environment of uncertainty, volatility in the markets around the world. And this is going to be their condition for some time to come. That is, there is no hope of any improvement in the condition of the stock markets as of now.