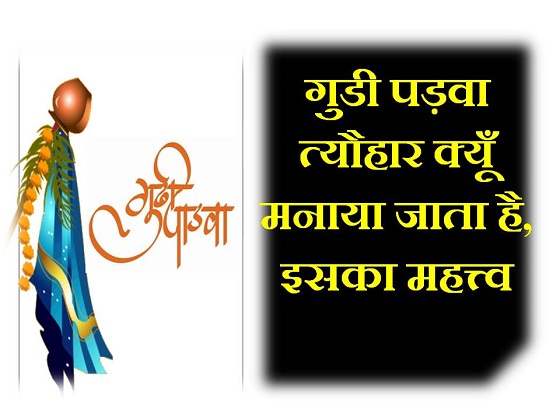 Today, through this article, we will try to know what is Gudi Padwa and why it is celebrated and what are the natural and spiritual beliefs behind it. If you also want to get information related to this Hindu New Year, then definitely read our author till the end.

What is the festival of Gudi Padwa?

This festival of Hinduism is celebrated every month on Shukla Pratipada of Chaitra month. In the month of Chaitra, many holy and religious festivals of Hinduism, fasting etc. make their debut. The practice of celebrating a holy festival like Gudi Padwa in many other places of India including Maharashtrian is going on since ancient times. hindu new year It also starts from this day. According to mythology, it is said that on this day Brahma ji created many other gods and goddesses, male-humans and demons, demons etc.

What is the meaning of Gudi Padwa?

As we and you know, when the name of any Hindu festival comes, there must be some significance or meaning attached to the name of that festival. Similarly, the word Gudi Padwa also has a different meaning and significance of its own. Gudi Padwa has grown from the union of two words. If we know the meaning of the word Gudi, then we get the Hindi meaning of ‘Victory Ensign’ and on the other hand, if we understand the Hindi meaning of the word Padwa, then we get the word ‘Pratipada’.

How is the festival of Gudi Padwa celebrated?

On this holy day, a Gudi is made and hoisted and its worship is done. The practice of celebrating this holy festival in Maharashtra and many other states associated with it is still going on since ancient times. On this auspicious day, people decorate the doors of their houses by making a bandana of mango leaves and it is believed that making this bandanavar in their house brings happiness, prosperity and happiness.

What is the Hindu significance of Gudi Padwa festival, the story related to it?

This holy festival is considered very important in Hinduism. According to Hindu Puranas, it is said that on this auspicious occasion, the coronation of Lord Shri Ram and Yudhishthira, the warrior of Mahabharata, was done.

If we look a little, then we come to know that on this holy day Chaitra Navratri also begins in Hinduism. According to some scholars, the beginning of Satyug was also started on this auspicious day i.e. on the day of Gudi Padwa. After Chaitra Navratri, the difference between days and nights is understood, that is, days become longer and nights become shorter.

Some wise pundits and great scholars believe that according to Vishnu Purana, Lord Shri Vishnu ji had also assumed his Matsya avatar on this day. According to all these religious and mythological stories, this day is seen as a very auspicious and beneficial day.

To know the history and importance of Ram Navami Click here

What is the method of worshiping Gudi Padwa?

When will the worship of Gudi Padwa be celebrated in the year 2022?

In 2022, this holy festival will be celebrated on the 2nd day of the month of April.

Any festival of Hinduism comes with its own importance and it just needs to be understood properly by the people. Somewhere we are forgetting our ancient and men’s civilizations by falling in the trap of English civilizations. The purpose of presenting this article of ours was to make you all aware of our ancient festivals and holy occasions. We should not always forget our Hindu religion and our Indian cultural civilizations. If you also agree with this purpose of ours, then please share this article with your friends and family members. If you want to express your thoughts to us on the occasion of this holy festival, then do share in the comments.