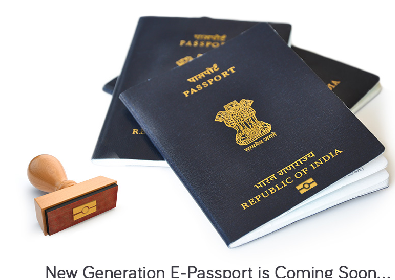 E passport with electronic chip in India Government of India has taken a big decision to digitize the passport of Indian citizens in the form of e passport. This idea is from some 8 years ago but it can be implemented in 2017. Due to the Narendra Modi government and its pro-digital political measures, it was announced that the passports of the Republic of India will soon have electronic chips. This will not only help in proper verification of the passport electronically, but it is also necessary that it will store all the biometric information of the passport holder for life. This step of Modi government is to curb the menace of fake passports. The data will be safe from the chip installed in it as well as the information hidden in it will also be safe. Complete information about this e-passport is given in this article.

Till now, India was issuing only physical copies of passports to its citizens. But now by changing these traditional passports, it has been decided to make new e-passports. This is not new in the world. Globally, such e-passports have been issued to their citizens in about 93 countries. Now in India also electronic passport or e-passport is to be issued with electronic chip, which will contain all your necessary information, which is traditionally printed and recorded in a physical passport. Also identity documents such as address proof, date of birth document, educational qualification documents etc. This e-passport is also called biometric passport. Biometric passport is a combination of paper and electronic passport, which contains the biometric information of the traveling passenger. Apart from this, there are some other features of this e-passport or biometric passport. What is passport? and how to apply Read to know.

Its features are as follows-

There are many benefits for you with e-passport or biometric passport, here are some of the benefits of e-passport-

How it will be beneficial for travelers,

E-passport is not only beneficial for the government but also for the travellers. There is a lot of possibility of loss of passport, whether it is lost in the country or abroad or stolen, but now all this will become easy due to e-passport. Once you have lost your passport, here you have the option to replace it but what if you are abroad? Biometric Passport will help you for this, as your biometric information will be available from its database. It is not necessary that the e-passport is correct in every aspect, it can be a loss by misusing the chips of innocent people. But the gain is more than the loss. So this is a very good idea of ​​the government.

Announcement made by Ministry of External Affairs on e-passport ,

In the issue of e-passport, the Ministry of External Affairs has made it clear that all passports will be implemented with electronic chips in 2017. Apart from this, all new passports that will be issued will also include this facility. This announcement was made at a media event organized at the Passport Office in Thiruvananthapuram. The Minister also announced the idea of ​​having a passport in his mobile phone, which can be presented after the completion of the digital passport process.

According to the announcement, digital passports will help in reducing the time taken for documentation, verification and processing of passports in the country, which is one of the important agendas of the present government. The Narendra Modi government also asked to facilitate some people in issuing passports, such as single mother, orphan, sadhu, mother with child etc. Narendra Modi Biography Read here.

This scheme will be operationalized in several phases for issuance of e-passport to its citizens. Indian Security Press is located in Nashik where e-passport will be manufactured. All necessary request activities for the purchase of electronic chips will be implemented very soon. In 2017 existing passport holders will also be able to expect to join with the new digital passport.