Types Of USB In Hindi: today’s Internet USB is widely used in time but not everyone has proper knowledge about USB, so we thought why not provide you complete information about “What is USB” today.

In this article, you will get to know what is USB, who invented USB, how many versions of USB are there, types of USB connectors and what are the advantages and disadvantages of USB. If you want to get complete information about USB, then definitely read this article till the end.

So without taking much of your time let us start this article to know more What is USB called?

The full form of USB is Universal Serial Bus. 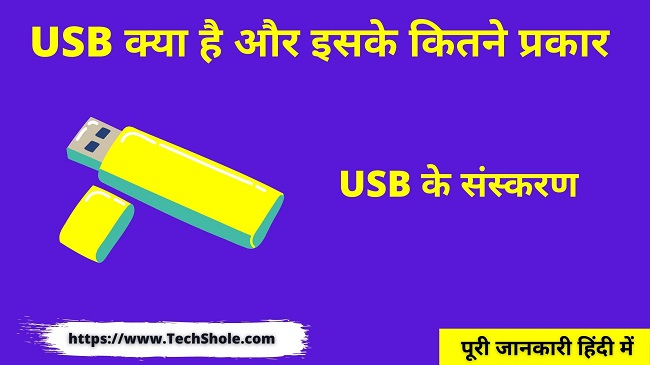 Universal Serial bus i.e. USB is a Plug & Play interface through which various devices are connected so that between them data And power can be transferred. In other words via USB computer Can communicate with each other through other devices.

usb one flash memory The device or flash drive is a memory storage device.

External devices are connected to the computer via USB, such as keyboard, mouse, printer, scanner, flash drives etc. Apart from this, USB is widely used to charge devices through electricity. USB is a standard connection for all devices.

Other names for USB

What is USB port?

A device may have one or more USB ports. Below we have given you the number of some of the most commonly used devices and their USB ports.

Devices that are connected using a USB connection are called USB devices. In today’s time thousands of different types of USB devices are used for different purposes. Following are the names of some of the USB devices –

The creation of USB was started in 1994 by the world’s 7 big tech companies Microsoft, Intel, IBM, Compaq, Nortel, DCE and NCE. The first version of USB was released in 1996. The credit for the invention of USB goes to Ajay Bhatt, who worked on the USB Standard in the Intel company.

Gradually USB continued to develop and today such USBs are available in the market which are capable of transferring data from one device to another at a very high speed. To better understand the development of USB, we will understand the USB version.

Following are all the release versions of USB –

USB1.0 This was the first version of USB which was launched in 1996. The data transfer speed in USB 1.0 was 1.5 Mbps. Although this speed is very less in today’s time, but in those days it used to be a good speed.

USB 2.0 With the development of technology, a new version of USB was also launched in 2000, which was named USB 2.0. The speed of USB 2.0 was 480 Mbps, which was very high according to that time, hence it was also named High Speed. This version of USB became very popular.

USB 3.0 – The new version of USB USB 3.0 was released in 2008 after almost 8 years. USB 3.0 was the most advanced version so far, which was capable of transferring data at a speed of 5 Gbps.

USB 3.1 In 2013, USB 3.1 was released which could transfer data at a speed of 10 Gbps, hence it was named Superspeed Plus. Along with this, a USB connector Type C was also released.

USB 4.0 – USB 4.0 was released in the year 2019, it is the latest and fastest version of USB with a speed of 40 Gbps. It is also known as Thunderbolt because it also has support for Thunderbolt.

Through the table below, we have given the names of all the versions of USB, their release year and the data transfer speed of USB in each version, so that it will be easy for you to remember the USB version.

Let us understand about them one by one.

These are the most common types of USB connectors that are widely used. USB Type A is used in most mobile, laptop chargers. Also all mouse, keyboard, pen drive In Adi only USB Type A or USB cable connector is found. These are flat and larger in size than other types of connectors.

USB B connectors are square in shape and can also be slightly larger in size. It is used very less. USB Type B connector is used to connect powered devices like scanner, printer to computer.

Type C is the newest and fastest USB connector which was released in the year 2013. You can use this connector from both sides, that is, it can be used from either side upside down or straight. Type C is used in most of the new devices made in recent times. In future only Type C connector will be used. now laptop Android Type C port has also started coming in smartphones etc.

This is the product of Apple company which is used only in Apple’s products. You must have seen that the connectors of iPhone, iPad etc. are different, these are the Lighting Connector.

There are many advantages of USB, some of which are the following –

Along with the advantages of USB, there are some disadvantages as well, which are as follows –

What is the latest version of USB?

The most recent version of USB is USB 4.0.

What is the full form of USB?

The full form of USB is Universal Serial Bus.

Why is USB used?

USB is used to connect two USB devices together, so that data and light can be transferred between them.

Conclusion: What is USB in Hindi

In this article we have given you what is usb In EnglishUSB Full Form, USB of with history and version USB connector Types of And you have been given complete information about the advantages and disadvantages of USB. After reading this article completely, now you can easily identify any USB and also you can know the difference between different USB.

That’s all in this article, hope you must have liked this article written by us, and if you have got to learn something from this article, then share this information with other people as well.