Kernel Kya Hai In Hindi: Even in this world of technology, we remain unfamiliar with many such things without which computer The kind of advanced technology that cannot be imagined, one of them is the kernel. We know very few of you what is kernel would know about. If you also do not know about the kernel, then after reading this article you will definitely become capable enough to explain to someone else about the kernel.

In today’s article we are going to tell you kernel what Is, kernel how many type of Would Is, kernel Of Main Work what Huh And Any Too computer Of For kernel necessary Why? Huh,

The most important thing about this article is that we have explained all this information to you in very easy words, hardly you will get information about kernel in Hindi language in such easy words on internet.

So let’s start today’s article without wasting any time. What is kernel software in hindi. 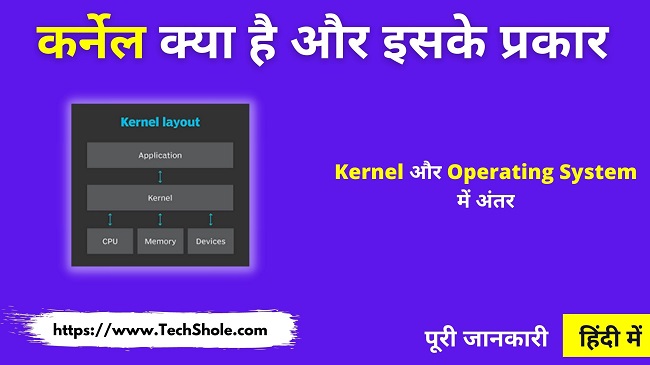 Kernel a computer Software which is Operating System an important part of. Kernel of computer hardware and performs the function of communication between the software. Kernel is a core component and it controls the whole system.

Kernel is the first program of the operating system which is loaded into the main memory for the system to work. main until the kernel system shuts down memory lives in.

Let us understand this with the help of an example, suppose you typing in computer For which you use MS Word. Keyboard is required for typing in MS Word. The kernel gives keyboard access to MS Word. Similarly, a printer is needed to print a typed document, and to save it hard disk is needed.

It is the kernel’s job to manage all these. Without kernel the operating system is unable to run. The kernel is responsible for managing memory, managing processes, and managing tasks and disks in a computer.

why kernel is necessary

Kernel is very important in computer without it the operating system will crash. The kernel provides resources to all the applications or software required in the computer.

Just imagine what would have happened in the computer if there was no kernel, let us understand with an example.

Suppose your computer’s RAM is 8 GB and your computer has 20 apps, which if run simultaneously will require 20 GB of RAM. Kernel available in computer RAM Accordingly, gives RAM to all the software. If the RAM becomes full and you want to open a new app, then the kernel will close any active software and give RAM to run the new app. In this way the computer does its work easily.

Now if the kernel is removed, then no one will have control over the RAM and all 20 applications will start running simultaneously, because there will be no one to control the application and the operating system will crash due to not enough RAM available in the computer.

Similar situation will happen with all hardware devices like storage, mike, Speaker, Processor e.t.c. Now you must have understood how important it is to have a kernel.

Monolithic Kernel runs all the basic system services such as memory management, input output communication, file system within its space. These kernels are very popular and they are used the most.

Micro Kernel has very little approach, it only manages basic functions. Its size is also small and the execution speed is also very slow. In this type of kernel, user service and kernel service are kept in separate address bars.

Hybrid Kernel is the most commonly used kernel, which is used in large commercial operating systems. This kernel is a mixed version of Monolithic Kernel and Micro Kernel.

Following are some of the main functions of the kernel in a computer:

Difference Between Kernel and Operating System

You can refer to the table below to understand the difference between Kernel and Operating System.

Explain what is kernel?

The kernel is an important part of the operating system, it remains in memory from the time the system is opened to shutdown and controls the entire system. Hardware and software are able to communicate with each other only through the kernel.

Is kernel hardware or software?

Kernel is a software program that is a core component of the operating system.

Which kernel is used in Windows?

What is the main function of kernel?

The main function of the kernel is to establish communication between computer hardware and software and to manage computer resources.

You learned: What is Kernel in Hindi

In today’s article we Kernel Kya Hai In Hindi, kernel Of type And tasks Told you about it in detail, as well as gave you information about the difference between kernel and operating system, removing the confusion of many people.

Kernel is a very important program for computer system, without kernel the operating system will crash and you will not be able to use the computer.

Hope you must have liked this article written by us, do share this article with your friends on social media too, and keep visiting our blog Techshole to read similar information.