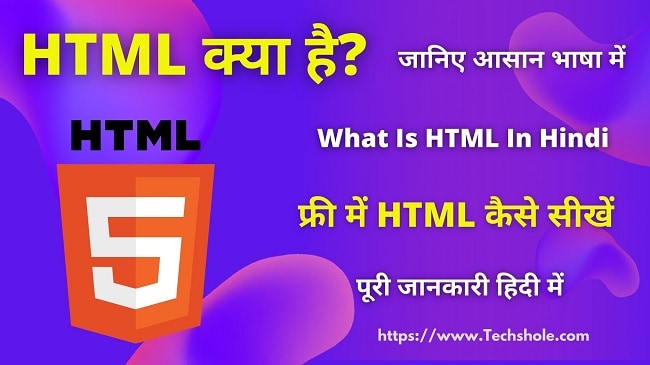 What is HTML In Hindi – if you coding/programming If you are interested in HTML then you must have heard about HTML and maybe you will know a little bit about HTML.

HTML A computer The language of which is the Basic Language. In today’s article we will tell you What is HTML, what are the types of HTML, What are HTML Tags And How to Learn HTML for Free Like will answer all the questions.

HTML whose full name is Hypertext Markup Language, it is a language of the computer which is used to create the webpage.

Simply put, HTML is a programming language with the help of which new webpages can be created. We our’s Web Browser All the webpages I see are made in HTML itself. There are many types of tags in HTML.

When the Internet was started, HTML language was used to create a website at that time. But today technology has become very advanced and today there are many computer languages ​​with the help of which websites can be created.

In this, each word has a different meaning, which we understand one by one –

Markup Language – It is a computer language that is used to create the structure of a webpage. HTML Tag is used to create a webpage in HTML. The text that comes between each tag has some mark, such as Heading, Bold, Table, Paragraph, Italic etc. This is called Markup.

Apart from HTML, there are other markup languages ​​such as XML, BBC, DHTML etc. But HTML is the most popular of these.

For this achievement, Lee was named in Time Magazine’s list of the 100 most important people in the world of the 20th century.

Tim Berners Lee was a physicist. He is also called Father of HTML.

HTML is mainly used to create a webpage or web document.

HTML was discovered in the 90s and still many changes are taking place in it and new versions of HTML keep coming from time to time.

Currently the responsibility of HTML is with an organization named World Wide Web Consortium (W3C).

Now we know about all the versions of HTML.

This is the first version of HTML, after the creation of HTML in 1990, for the first time in 1991, a document named HTML Tag was released, in which 18 elements of HTML were told.

HTML 1.0 was published in 1993. Its use Internet But information was used to share. It could be read by opening it in a web browser.

HTML 2.0 was published in 1995, some other features were added to it such as Image Tag.

A new version of HTML was published in 1997. It was made by the W3C company. HTML 3.2 was an advance from all the earlier versions, many new tags were added to it.

This is the latest version of HTML so far. It was air published in 2014. Many new tags have been included in this.

The basic structure of HTML is the same in all webpages, so it is important to learn it before learning coding.

the entire document is closed.

If you want to learn HTML, then for this you must have the knowledge of Basic Tag of HTML. There are about 120 tags in HTML 5.0, but some basic tags which are mainly useful are as follows –

With the help of this tag, the browser is told that this document is written in HTML.

This is the Main HTML Tag, it is also called Main Container, from this the making of HTML document is started. There are other elements inside the container itself. And finally to close the web page, html closing tag < /html > is used.

Head tag is used to create the header in the webpage, there are also other tags inside it, with the help of which give information to the webpage, eg,