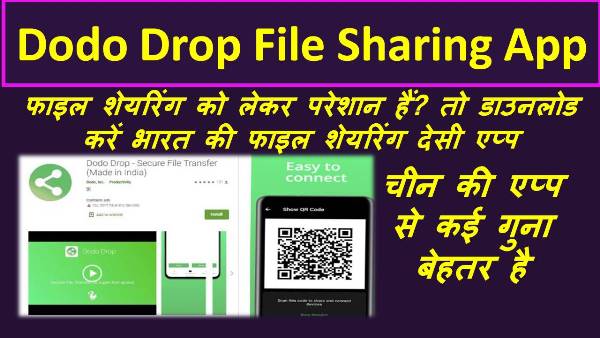 At this time epidemics like corona virus are showing their wrath in the world. This disease has started from China. Due to which the image of China has become very bad in the whole world these days. China is also being opposed. Due to the infiltration of China inside the border of our country, there is anger about China in the country. Due to this, Chinese products and apps are being boycotted in the country as well as all over the world. At least 59 Chinese apps have been shut down in India. Due to which people are facing some problems, but people living in India have also started to solve it. After the closure of file sharing apps like Share It and Xender, an app has been launched to share files in India, whose information we are giving here.

Which is the desi app for file sharing

People in India used to use apps like China’s Share it or Xender to share any file, but now a person from India has launched such an app for them, which will help them to share all their files related to their files. The trouble will be over. This app name is Dodo Drop App.

What is Quora and how is it used read here,

What is Dodo Drop App

Dodo Drop App is made in India to completely compete with China’s ShareIt App. Which can easily transfer any files, photos, videos and text messages from one device to another. That too without internet access.

Dodo Drop App has been created by a person living in Rajouri district of Jammu and Kashmir state of India. The name of the person who built it is Ashfaq Mahmood Choudhary. This is only a 17 year old boy. Who has created this app at such a young age as an alternative to apps like ShareIt. He started social media surfing at the age of 13 and also built a website. This app has been launched in July after the ban on Chinese app.

Any Android mobile phone user in India can download the Dodo Drop App from the Google Play Store on their phone. And if a user uses an iPhone, then he can download this app by going to the Apple Store in his phone. To download, users will have to search ‘Dodo Drop – Secure File Transfer’. After which they will get this app, by clicking on it they can download and install this app in their phone.

netflix Download and watch the latest movies, that too sitting at home.

Therefore, due to the creation of such an app in India, the Modi government’s Make in India campaign is getting flight. Due to this, now various companies of the country have started earning huge profits by launching their products and apps. After the ban on China’s app, the launch of such an app in India is affecting China’s economy very badly. It is expected that more such apps will be made in the country, so that people will no longer need to use Chinese apps and all their problems will also end.

Ans: Any file, photo, video, message etc. can be transferred from one device to another.

Ans: Ashfaq Mahmood Choudhary, a youth from Jammu and Kashmir.

Q: What is the speed of Dodo Drop App?

Q: How to transfer files with Dodo Drop App?