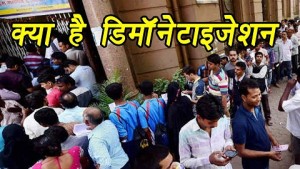 What is Demonetisation and its Advantages and Disadvantages in hindi Before 8 November 2016, the common people of India might have been unfamiliar with this word. The reason for this has been the almost non-use of this word in everyday life. Yes, students of economics, teachers and then the knowers of economics must have been aware of demonetisation, but they might not have even thought about whether it can be implemented in India. However, the way Narendra Modi’s government of the country was active to curb black money for the last two and a half years, it was speculated that he could take some big and unprecedented step to destroy black money. Huh. Finally, while addressing the nation on 8 November 2016, he announced the demonetization of high denomination notes i.e. 500 and 1000 notes from midnight of the same day. After this announcement, the notes of both the above denominations became legally illegal and there was no value of those notes i.e. currency. PM Modi discontinued 1000 and 500 notes,

In short, “Demonetisation is the process under which the government of a country legally bans any currency (note) of its country. After the ban, that currency has no value. Any kind of purchase, sale, transaction and accumulation of that currency is also considered a crime. After the ban on currency, the government sets a time limit, within which people can exchange the banned notes in banks and replace them with existing notes of another class of similar denomination or newly issued notes. If the banned currency is not exchanged or deposited in the bank within the stipulated time limit, then all those notes become pieces of paper or junk.

There are many reasons for the government of any country to ban a particular class or classes of notes of different denominations prevalent in the country. The most important thing about this type of ban is that generally the ban is imposed on the notes of large denomination. For example, 500 and 1000 notes were banned in India, which were the largest denomination notes among the notes in circulation in the country. The main reason for demonetization is The destructive role of black money and counterfeit currency in the country’s economy, When people in a country start doing more cash transactions for the purpose of tax evasion, then hoarding of currency increases and then this hoarding gradually becomes a parallel economy in that country in the form of black money. Is. In such a situation, black money gets out of the mainstream of the country’s economy, which creates the problem of cash crunch. With the exit of currency in the form of black money from the mainstream of the economy, not only harms the economy of that country but it also becomes a challenge for the security of the country. This black money becomes the main source of terrorism, Naxalism, crime, hawala business and smuggling in the country. At the same time, under the guise of this criminal activity, the enemy countries conspire to cripple the country’s economic system by dumping a huge amount of counterfeit currency in the country.

For all these activities hoarding is done in notes of large denominations. If we look at the data released by the Reserve Bank of India (RBI), it becomes clear that a huge empire of black money had been established in the country. According to the data, as on March 31, 2016, notes worth Rs 16.42 lakh crore were in circulation in the country, out of which Rs 14.18 lakh crore were in the denominations of 500 and 1000. That is, the share of 500 and 1000 denomination notes out of the total notes was 86 percent. But RBI data says that only 24 per cent of these large denomination notes were in the market. That is, the remaining 76 percent of the high denomination notes were hoarded and converted into black money.

On the other hand the Indian economy was also plagued by the increasing number of counterfeit notes. It was estimated that before demonetisation, there was an influx of counterfeit notes worth about Rs 400 crore in the country’s economy. That is, there were 250 fake notes per 10 lakh notes. Not only this, the stock of these counterfeit notes was also increasing by 70 crores every year. Of these counterfeit notes, more than 50 per cent were notes in the denomination of 1000 only and the rest were in the denomination of 500. In such a situation, the hollowing of the Indian economy was bound to happen. Ultimately, it was necessary that the government should take such a step, which could hit the game of black money and counterfeit currency which is becoming a scourge for the economy. The decision of demonetization taken by the present Narendra Modi government of the country can be called a successful effort taken in this direction.

It is not that the decision taken by the present government of India on demonetisation is the first one. Even before this, the whip of demonetization has started in the country. Notes of 500, 1000 and 10,000 denominations were demonetised for the first time in the year 1946. In the days to come, the Wanchoo Committee set up to investigate Direct Taxes had advised the government to demonetise in the 1970s to bring out and destroy black money. But by the time the government took the final decision in this regard, even before the government’s plan to demonetise was exposed and black money holders became alert. The then government eventually had to cancel the plan of demonetisation.

In 1977, after the lifting of the Emergency, the Congress had to withdraw from power and the Janata Party government was formed under the leadership of Morarji Desai. This government demonetized the 1000, 5000 and 10,000 denomination notes in January 1978. However, IG Patel, the then Governor of the Reserve Bank, did not support this move of the government. Morarji Desai Biography Read here.

Overall, it can be said that demonetization brings only long-term benefit to the economy of any country, not any particular loss.