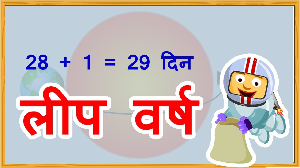 29 days in February (Leap Years) in Hindi In every fourth year, one more day is added to the month of February, making 29 days. This year is called Leap Year and this day is called Leap Day. Leap year has 366 days instead of 365. February is the shortest month of the year, it has only 28 days, so this leap day has been added to this month. It takes 365 days, 6 hours for the Earth to make one complete revolution around the Sun. So these 6 hours are added in four years to become 24 hours, which makes 1 leap day. If we do not add this extra day every fourth year, then every year 6 hours will be removed from the calendar and then every 100 years 24 days will disappear from the calendar.

Why does every fourth year in February have 29 days?

Why 29 days in February Leap Years in Hindi

Why are there 28 days in February? ,Why February has 28 days in hindi,

The first calendar was made by the Romans, they used to be very practical. The Romans made this calendar according to the position of the moon. His calendar was from March to December, in which there were only 304 days. By the way, why the Romans made it between March and December, there is not much information about it, but it is said that January was colder in Rome in February, so this time was not important for the Romans. Because of which it was not included in the calendar. The weather started changing from the end of December, which lasted till the beginning of March. The calendar needed a perfect sequence.

After some time King Numa came, who thought that the calendar needed a lot of correct order. He added the months of January and February to the year. The month of January was named after Lord Janus. At that time also the new year used to start from March. Almost 7 decades later, Julius called January the first month of the year and since then the new year started from this month. February had 23-24 days, while the rest of the month used to have 29 or 31 days.

Leap day was introduced by Julian in Rome in the first century BC. There was also a time when people in Rome considered 355 days a year, leaving 22 days apart in every 2 years. In 45 BC, Julius Caesar ordered his astronomer to find a solution to this problem. The astronomer started trying to make it compatible with the position of the Sun instead of the Moon. Astronomers created a year of 365 days, in which one day was added to February every fourth year from the remaining time. The month of February was the shortest, due to which Leap Day was added to the leap year in February. Apart from this, February was considered as the last month at that time, so this day was also added to February as the last day of the year.

There was also a reason that the number 28 was not considered good by the Romans, but it was necessary to add it to the calendar, so it was kept as a small month. The month of February was not good in his eyes. In this month, the Romans used to perform shraddha, tarpan for their ancestors, this is also one of the reasons why this month was not good for them. No auspicious work used to happen in this month. Therefore, it was made 29 days by adding one day in the leap year.

Some people say that earlier February used to have 30 days, and August used to have 29 days. But when Caesar Augustus became the ruler, he reduced the month of his name from February by 2 days to August, so that August also had 31 days equal to July.

The Earth revolves around the Sun in 365 days, 5 hours, 48 ​​minutes, 45 seconds. If there are only 365 days in a year, then the remaining time will be removed from the calendar every year. Due to which 24 days will disappear in 100 years which is a big figure. This will disturb the order of the entire calendar. The festival, the date, even the time would have been different. This leap day was added in February to keep the solar system in sync with the Gregorian calendar.

How is Leap Year Seen? (How to calculate leap year)

According to the Gregorian calendar, that year is considered as a leap year only after fulfilling three things.

Julius Caesar started the leap year, but he kept only one rule. According to him, if a year is divisible by 4, it will be a leap year. According to this rule there would have been many leap years but they were not correct according to the solar position. Then the Gregorian calendar came out with new rules for leap year after about 200 years, after which the correct leap year could be detected.

Children born in leap year are called leaplings or leapers. The chance of a child being born on a leap day is one in 1461. There are about 5 million leaplings in the whole world. Some superstitions believe that children born on this day possess unusual talents, great personalities, even special powers. They celebrate their birthday on 28 February or 1 March.