C Language Kya hai In Hindi :- Interest of children in today’s era computer And Coding On the other hand, everyone wants to possess computer knowledge. Computer has become a very important part of human life in today’s time.

In today’s article, we are going to tell you about the most popular programming language of the computer, C-Language, because we know that you search engine Feather Knowledge of C Language have come searching, C language is a basic language that everyone can learn and others can learn it. programming language It is also easy to learn.

Through this article, we are going to give you a lot of information related to C language, so stay tuned to the end of the article and start this article. C Language what happens And how to learn C language for free.

C Language It is the language of a computer. It is a General Purpose Language which is used to create many types of software, applications. It is one of the most popular and easy to learn computer language. 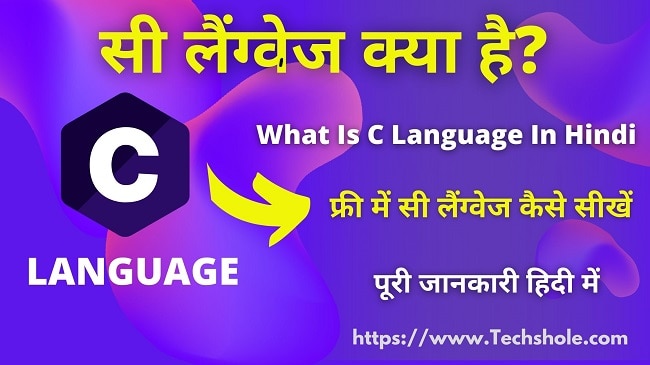 With the help of C programming, both low level and high level programming can be done. That’s why it is also called Mid Level Programming.

Basic features of all other programming languages ​​are covered in C language such as Data Type, Pointer, Loop, Function, Variable. That’s why it is also called Mother Language.

C Language was created in 1972 by Dennis Ritchie in the bell laboratories of AT and T (American Telephone and Telegraph). Initially Dennis created C language to design Unix Operating System.

Earlier languages ​​like B, BPCL were used to write the operating system.

C language was created to overcome the problem in both these languages. C language in is a mixed form of both the languages.

The C language was not so popular and popular before, but when Dennis Ritchie together with Brian Kernighan published a book called The C Programming Language, then this language became more popular and it was also used in many things.

Since C Language is a General Purpose Language, it is used for many things, some of which we have told you below –

Application Software C language is also used to make it. Many graphic applications, games are made in C language only.

all Network There is a software in the device from which the network running in the device can be managed. C Programming is used to create many types of Network Device Management Software.

Complier is a type of programming software that processes the instructions written in programming and converts them into machine language. C language is also used to make these compilers.

Structure of C – Language in Hindi

Before doing C programming, a flow chart has to be made. And in this chart a diagram of the basic structure of C language has to be made. Those basic things stay like this.

There is something objective in all programming, with the help of which it is defined what the program is being written about.

The header file is written in the head section of Programming. It is also called link section, like – stdio.h, dos.h, conio.h etc.

They are written like this in the head section. include

There are many functions used in programming in the link section.

This is a very important part of C programming and it is necessary to have it in all C programming. Because the execution of the program also starts from Main Function ().

Variable is used in the middle of C programming. Input is taken from the user only by the use of Variable.

In the Executable part, there is that part of Programming which has to be executed.

The following features of C language make it special –

C language is faster than an interpreter based programming language like Java, Python, because HTML, CSS, Java, Python There are more features in it, due to which their speed is low.

C is a Static Type Programming Language. In this the data type of the variable is checked at compile time. By which it is known at compile time itself that which type of data input is to be taken in which variable.

C Language is a General Purpose Language, it is used to make many applications, software etc.

C language is a portable language, which means once a program is created in it, it can be operated in any other machine.

It is very easy to learn C language and after learning it, you can easily learn other programming languages ​​as well.

C language is a General Purpose language, learning it can give you many benefits such as –

How to Learn C Language

The most important thing comes How to Learn C Language,

C language was created in 1972 by Dennis Ritchie in the bell laboratories of AT and T (American Telephone and Telegraph).

Why was C language created in the beginning?

What is the name of the book of C language?

The name of the book of C language is The C Programming Language.

What is general purpose language?

General purpose language is the programming language that is used to create all types of applications and software.

What is Procedural Language?

Procedural Language is called that language in which instructions are followed step by step and they are executed.

Why was it named as C language?

Because all the ideas of C language were taken from the old computer programming language B, hence it was named C language.

Conclusion – What is C language in Hindi

Today’s article what is c language in Hindi We have provided you computer What is C Language? And shared all the information related to C language with you.

Tell me by commenting how you liked this article and also share it as much as possible with your friends.