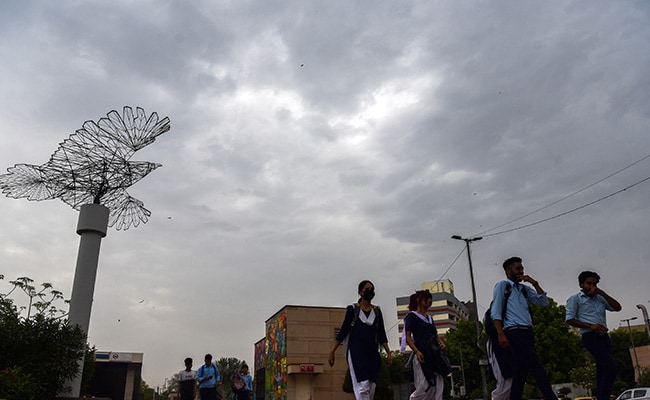 After the rain stopped in Delhi-NCR, people got relief from the heat.

After the rains stopped in Delhi-NCR, there has been a slight increase in the humidity, but people have got relief from the heat. Meanwhile, according to the Indian Meteorological Department, on September 28, the minimum temperature was recorded at 23.6 degrees Celsius, one degree above normal.

The IMD said that the sky is likely to remain partly cloudy during the day, with the maximum temperature likely to hover around 35 degrees Celsius. Mahesh Palawat, vice-president (meteorology and climate change), Skymet Weather, said that the southwest monsoon will pass out of some more parts of Kutch regions of western Rajasthan, Punjab, Haryana and Gujarat in the next two to three days. After this, it will also be outside Delhi-NCR by 1-2 October.

The IMD said that the line of withdrawal of Southwest Monsoon is currently passing through Khajuwala, Bikaner, Jodhpur and Naliya. However, a cyclonic circulation over west-central Bay of Bengal may intensify into a low pressure area, which will move in a northwest direction up to Madhya Pradesh. Palawat said that parts of Madhya Pradesh, Uttar Pradesh, East Rajasthan and Delhi-NCR are expected to receive rain between October 3 and October 7.

The city receives an average of 125.1 mm of rain in September. Last week’s incessant rains have also reduced the overall deficit in the monsoon season. Delhi’s total rainfall during the monsoon season fell from 35 per cent (by September 22) to 17 per cent on the morning of 25 September.

read this also:-
“Making Sachin Pilot as the CM of Rajasthan is equivalent to handing over the state to BJP…”: Team Gehlot
Center “Ban” Popular Front of India for 5 Years, Alleging Terror Link