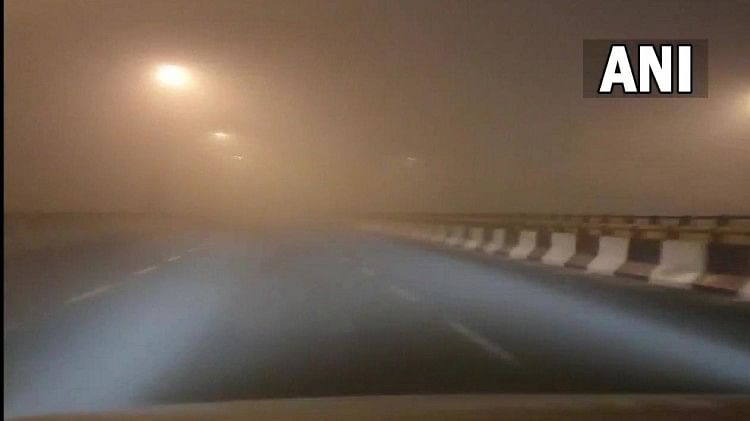 Entire North India including the national capital Delhi is in the grip of cold wave and dense fog. People in Delhi-NCR faced severe cold on Monday. Dense fog was witnessed in Delhi on Tuesday morning as the cold wave continued. Also, the minimum temperature was recorded at seven degree Celsius. According to the Meteorological Department, there is no possibility of any significant change in temperature. Till the new year, the temperature will continue to fluctuate like this. Cold wave and cold will continue to disturb for two days. At the same time, the temperature remained below zero in most areas of Kashmir. Water supply lines and interior parts of Dal Lake have also frozen in many areas.

People in the plains of North India are shivering with cold due to the cold winds coming from the mountains. Like Sunday, Delhi-NCR remained in the grip of cold wave and dense fog on Monday. The effect of the harsh winter was that Delhi recorded the coldest day of the season on Monday. There was a drop in both the maximum and minimum temperatures. Due to cold wave conditions at isolated places, the maximum temperature in two areas reached 11 degrees Celsius, while the minimum temperature in three areas recorded four degrees Celsius.

Cold wave conditions and dense fog blanketed most parts of Delhi, UP, Punjab, Haryana and Chandigarh on Monday morning. Due to this the visibility at Palam dropped to 50 meters at 5:30 am. In Punjab, the visibility was 0 in Bathinda, 25 in Amritsar, Ambala, 50 in Hisar. Road and rail traffic was also affected.

On Tuesday, the maximum temperature is likely to be 17 degrees and the minimum temperature is 6 degrees. On Monday, severe cold wave conditions were observed at many places in Rajasthan and at isolated places in Himachal Pradesh, Punjab, Haryana, Chandigarh and Delhi. Cold to very cold day conditions were observed at most places in Punjab, Haryana, Chandigarh at many places in Delhi and at isolated places over Uttarakhand, West Uttar Pradesh and Rajasthan.