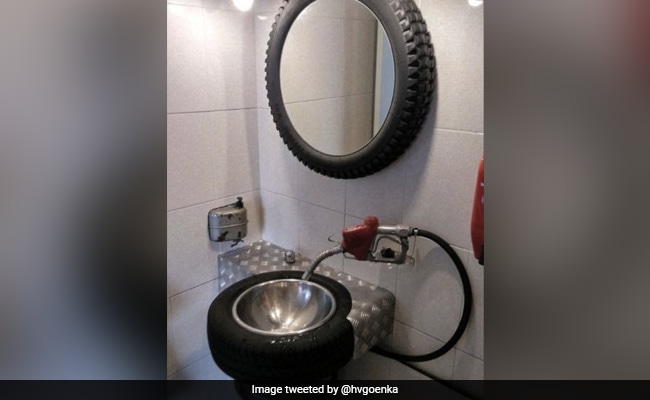 Washbasin made from old tires in the bathroom, Harsh Goenka shared a surprising trick

The importance of recycling has become a necessity in contemporary times. Not only plastic goods, recycling and reusing rubber products has also become a very urgent need. Industrialist Harsh Goenka has shared a post, which shows an innovative way of reusing tyres, and it has taken the internet by storm.

This post shared on Twitter also includes a picture of the washbasin. The body of the basin is made of tyre. Also, the frame of the oval shaped mirror is also made of a tyre. Another eye-catching thing in the picture is the water tap which is made out of the outlet used for filling fuel at gas stations.

The caption reads, “Every day I discover new uses for tyres.”

The post has been viewed more than 41 thousand times and got more than 600 likes. Tweeple was impressed by the clever use of tires and commented on how this should be used in a train bathroom. Many pointed out that the material would be less prone to corrosion and is actually a better option.

“It’s very creative,” wrote one Twitter user, while another wrote, “very eco-friendly.” However, one pointed out, that tires are inflammable products and should be handled with care.