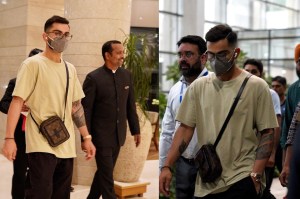 Virat Kohli New Look: Former India captain and star batsman Virat Kohli is once again in the news. After scoring 71st century in the Asia Cup, he has now changed his hairstyle. The photos of his new look are becoming increasingly viral on social media. Let us tell you that Kohli has always been in the discussion about his hairstyle.

Virat made a splash in the Asia Cup

Let us tell you that Virat Kohli had a blast with the bat in the recently held Asia Cup. He scored 276 runs in 5 matches with the help of two half-centuries and a century. Kohli scored an unbeaten 122 off 61 balls in the last match against Afghanistan.

After about three years, Virat’s bat had scored a century. Which the fans were waiting for for many days. Now fans are lavishing love on his new look too.

Virat Kohli has scored 71st century in international cricket. He has equaled former Australia captain Ricky Ponting by hitting the 71st century. At the same time, more centuries than Kohli are now in the name of only Sachin Tendulkar (100).