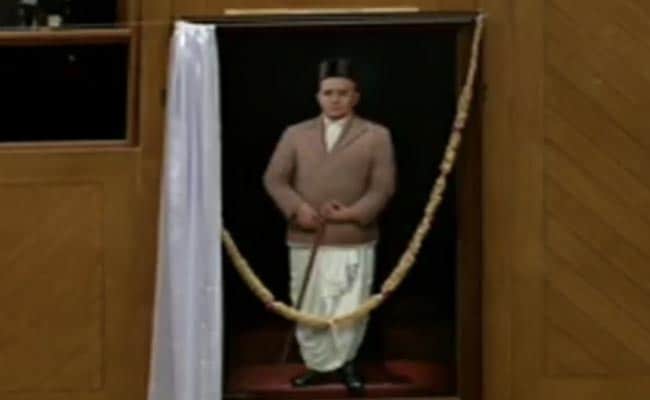 Veer Savarkar is also related to Belagavi, which is at the center of the ongoing border dispute between Karnataka and neighboring Maharashtra…

Opposition parties have started protesting on the steps of the assembly building itself after the ruling Bharatiya Janata Party (BJP) government in Karnataka installed a portrait of Veer Savarkar inside the state assembly. Former Karnataka Chief Minister and Congress leader Siddaramaiah, who is currently the Leader of the Opposition, led the protest and questioned the need for a portrait of the controversial figure in the Karnataka Assembly.

On this issue, Karnataka Chief Minister Basavaraj Bommai said, “I am not aware of the photograph being put up in the assembly… I have just arrived, and the speaker is responsible for what happens inside the assembly… I I will talk to the Speaker and the Leader of the Opposition regarding this issue.”

This is the latest in the controversies going on in Karnataka regarding Vinayak Savarkar, while assembly elections are due again in the state next year. In fact, the state’s BJP government is running a state-wide awareness campaign about Veer Savarkar, taking it a step further, it has put up Savarkar’s portrait in the Assembly this time.

Veer Savarkar has also been associated with Belagavi, which is the center of the ongoing border dispute between Karnataka and neighboring Maharashtra. In the year 1950, Savarkar was kept in careful custody for four months in the Hindalga Central Jail in Belagavi. At that time orders for his arrest were issued from Mumbai, and he was arrested as soon as he reached Belagavi. Savarkar was kept under preventive detention to prevent him from protesting against the visit of Liaquat Ali Khan, who became the first Prime Minister of Pakistan at that time.

Savarkar was released after a petition was filed by his family. He also filed an affidavit in the Bombay High Court, in which he promised to stay away from political activities.

The last winter session of the Basavaraj Bommai-led BJP government, ahead of next year’s assembly elections, is also being held in Belagavi. The border dispute is likely to dominate the 10-day session as well. In this context, the district administration has banned the entry of Shiv Sena’s Lok Sabha MP Dhairysheel Mane from Maharashtra into Belagavi.

— read this also —
, “Bilawal ka Bilbilana…”, Anurag Thakur lashed out at Pakistan on the issue of terrorism
, “Watch the film with your daughter…” : MP speaker challenges SRK on ‘Pathan’ controversy
, Watch VIDEO: Delhi-NCR wrapped in dense fog, speed slows down due to decrease in visibility

Elon Musk asked users for opinion through a poll, “Should I leave the post of Twitter CEO?”