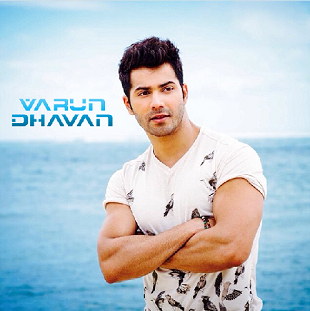 Varun Dhawan biography and Upcoming Movies in Hindi Varun Dhawan is a famous young actor of Hindi film. He was an assistant director in Shah Rukh starrer ‘My Name is Khan’ and from there Karan caught his eye and got the job in the film ‘Student of the Year’ for the first time as an actor. This romantic comedy film came in the year 2012 and was very popular among the youth, and Varun was also nominated for ‘Best Male Debut’ for this film. Varun made his mark with Humpty Sharma Dulhania (2014) and ABCD-2 (2014). His film Badlapur (2015) was also very popular and critics also praised Varun’s performance in Badlapur. For this, he was also nominated as the Best Actor in the Filmfare Award.

He was born on 24 April 1987 in Mumbai to father director David Dhawan. Varun did his higher secondary education from HR College of Commerce and Economics and did business management course from Trent University, Nottingham, United Kingdom, and after that Varun did his father’s work for a few days to learn acting and direction in Hindi films. Together and later worked as an assistant director with Karan Johar in 2010.

Varun, who worked in the film ‘Student of the Year’ as Rohan Nanda, was first highlighted by film critics Rajeev Masand and Taran Adarsh ​​that he has a lot of potential. Varun has all the qualities of acting and easily takes off the toughest scenes on the screen. The film ‘Student of the Year’ became the highest grossing film of that year. After 2012, Varun’s two films were released in 2014, ‘Main Tera Hero’ Balaji Motion Pictures’ film directed by his father David Dhawan himself. This film established Varun as a solo hero.

Varun’s movies till date and its details –

Student of the year

Actor Varun Dhawan made his film debut in 2012 with Karan Johar’s ‘Student of the Year’, co-starring Sidharth Malhotra and Mahesh Bhatt’s daughter Alia Bhatt. In this film, Varun played the role of Rohit Nanda, a college student and son of a big businessman, who does not get along with his father at all and also has a rift with friends for school competition. Rishi Kapoor was also in this film based on sour sweet friendship. Karan Johar’s film did a good business and all the three actors working in this film have now become established actors of Bollywood.

I am your hero

Varun worked in Balaji Motion Pictures’ 2014 film Main Tera Hero, directed by father David Dhawan, which was a remake of the Telugu film Kanderega. In this film, Varun was in the role of Manchale Srinath Seenu Prasad who was completely a mischievous student. He had two heroines in this film, Ileana D’Cruz and Nargis Fakhri. Together Anupam Kher and Saurabh Shukla had an important role. Due to the comedy timing in this film, the pairing of Govinda and David Dhawan was remembered. This film also proved to be a super hit at the box office.

Varun appeared opposite Alia Bhatt in the 2014 film Humpty Sharma Ki Dulhania produced by Karan Johar, a tribute to the film Dilwale Dulhinia Le Jayenge. In this film too, he was in the role of a playful boy named Rakesh Humpty Sharma, he has relationships with many women and in the end the heart gets stuck on Alia after coming to the right place. India Today’s Rohit Khilnani praised Varun for his versatility and his performance in the film. Directed by Shashank Khaitan, this film earned a lot and the audio cassette of the music of this film also sold a lot.

Sriram Raghavan’s criminally manobhum film ‘Badlapur’ is based on a revenge story where Varun takes vengeance on the murderer of his wife and child after 15 years. Working in this film was quite standard for Varun’s career, from critics to the general audience, the film was highly appreciated. Film critic Raja Sen said that in this film, Varun played a serious character apart from his previous films and many times many things are evident from his eyes. He was also nominated for Best Actor by Filmfare for this film.

The next film was also different for Varun. In this film with Shraddha Kapoor, Varun played the role of Suresh Mukund, who is a true dancer in life. The film was modeled on the 2012 International Hip Hop winner. A dancer who moves out of the town of Mumbai to fulfill his mother’s dream and earns a name at the international level. Prabhu Deva was also in this film, and many more new dancers were cast. This second film of Remo D’Souza also became a hit after criticism from critics and Varun came to be considered as star power from this film.

In the year 2015, he worked in Bollywood’s Sartaj Shahrukh Khan and Kajol’s film Dilwale. Although the main characters of this film were Shahrukh and Kajol, Varun got himself noticed too. This film of Rohit Shetty did well at the box office.

In the year 2016, he worked with John Abraham in the film Dishoom directed by his brother Rohit Dhawan. It was an action film and his character in this film was Junaid Ansari Police Inspector. Full of adventure and action, this film could only do average business at the box office.

After this, in the year 2017, Varun is going to appear in the upcoming film ‘Badrinath Ki Dulhaniya’, in which he has played the role of Badrinath and Alia Bhatt will be seen with him once again in this film. This film is also made under the direction of Shashank Khaitan. Apart from this, he is also working in his father’s Judwaa-2.

Varun is very active, if there is no suiting of films, then he keeps doing something or the other. In the year 2013, he also conducted an award show along with Ayushmann Khurrana and Sidharth Malhotra. ayushman khurana biography read to This operation was widely praised. After this an event was organized for the flood victims in which Alia Bhatt, Aditya Roy Kapoor, Shraddha Kapoor and Huma Qureshi also participated.

Varun has an elder brother Rohit Dhawan, and he is also a film director. Varun’s name has been in the media headlines with two girls. Initially there was talk of a relationship with Aaliya but Aaliya refused. Then the media had spread rumors on his relationship with a model too. life of alia bhatt read about.