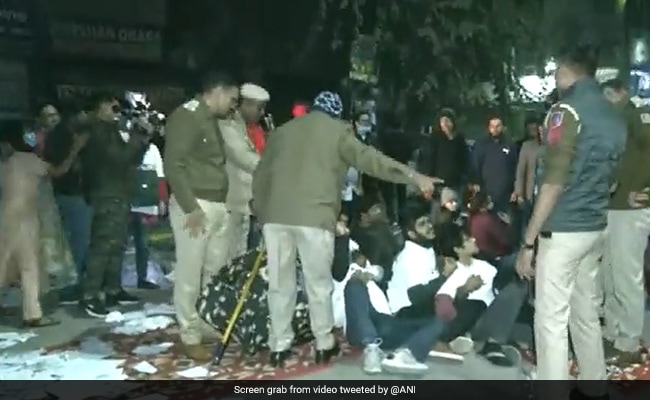 Candidates preparing for UPSC (IAS-IPS) in Old Rajendra Nagar area of ​​Delhi staged a protest on Tuesday demanding extra attempt. Police used force to disperse the candidates protesting in the bone-chilling cold. On protesting, the police lathicharged. Many candidates have also been taken into custody. These candidates were demanding to give one more chance to pass the exam citing Corona epidemic.

The protesting candidates were not able to appear in the UPSC exam in the years 2020 and 2021 due to the coronavirus pandemic. Some of them themselves had become corona positive, while some had died of corona in their house. At the same time, a candidate was in the Kovid Containment Zone. On Tuesday late night, the crowd of candidates for dharna in Old Rajendra Nagar area was increasing. He also took out a candle march. At first the police tried to convince them, but when the candidates did not agree, the police had to use force.

The candidates had brought blankets, sheets and books with them for the demonstration. They had placards related to their demands in their hands. They were raising slogans of Bharat Mata Ki Jai and Vande Mataram. After 10 pm, the number of candidates coming was increasing. The candidates alleged that the police forcefully removed them in the cold night.

Candidates of competitive exams say that the central government has definitely provided some relief to every class and every region to make up for the losses caused by the Corona epidemic. Age relaxation of two years has been given to the candidates under Agneepath scheme and three years relaxation to the candidates of SSC GD. In SSC CGL also, lakhs of candidates have been benefitted for the change in age reckoning policy. But the students preparing for the UPSC Civil Services Examination are still untouched by this relief. Let us inform that earlier in the years 1979, 1990, 1992, 2014 and 2015, UPSC had given such relaxation.

UPSC Recruitment 2022: Opportunity to get government job, salary will be in lakhs, last date of application near