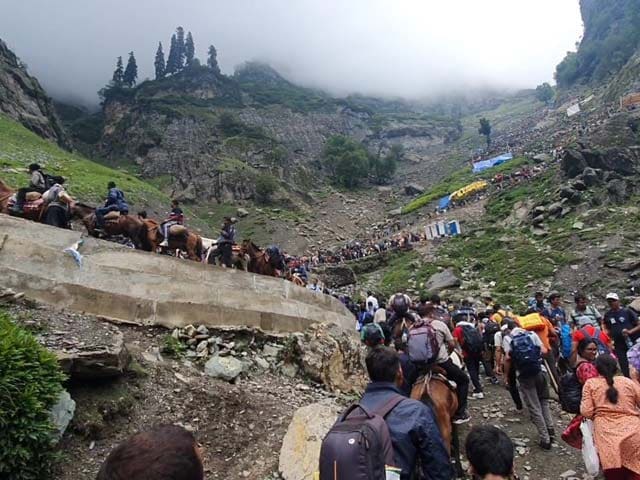 Amarnath Yatra has started once again this year after being closed for two years due to Corona. This is the reason that there is a lot of enthusiasm among the devotees regarding the Amarnath Yatra. Such a large number of people are coming to visit the holy Amarnath cave. Our colleague Sharad Sharma took the oldest and traditional route from Pahalgam for Amarnath Yatra.

It is said that when Mata Parvati had asked Lord Shiva the secret of immortality and Lord Bholenath had taken her towards the cave, he had gone through the same path of Pahalgam. Here Lord Shiva also left his ride Nandi. On the other hand, the place where Lord Shiva separated the moon from his hair is Chandanwari.

Pahalgam is 96 kms from Srinagar airport. At the same time, the distance of Pahalgam from Jammu railway station is 315 km. The road from Chandanwari to Pisa Top is quite inaccessible. During this time people also take help of horse riding.

There is a very beautiful Sheshnag lake above Nagkothi. It is said that Lord Shiva brought down Sheshnag from his neck here. Horses and mules also help people a lot, due to which thousands of devotees can reach the holy cave. The highest point is Ganesh Top at a distance of sixteen and a half kilometers from Chandanwari.

On the other hand, Panchtarni is nine and a half kilometers ahead of Ganesh Top. Here Mahadev had separated the five elements from himself. Helicopter service is also available from Pahalgam and Baltal to Panchtarni. The distance from Panchtarni to the holy Amarnath cave is six kilometers. There are 390 steps near the cave, on which the devotees reach to see Baba. Thousands of devotees visit Baba Barfani daily in this yatra which lasts till 11th August.

It is said that during that time two white pigeons had heard this secret, after this Mahadev said that you have already heard, so now those who come here and see you, they will get the virtue of seeing Shiva and Parvati. .