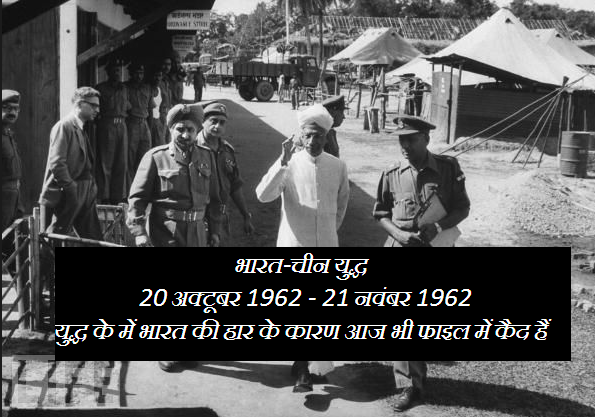 The history of the war between China and India dates back to 1962. India had to face defeat in this war. For which many reasons came to the fore. At that time, India had to face defeat due to defense forces and political forces. Many soldiers were martyred in this. The effect of this result was very bad for India and China, especially for India. On the day this war started, people national unity day Still remembers for today. The history of this war, the failure of India and its reason is shown here.

History of India History Pages A terrible war recorded in which took place between India and China in 1962. India had to face defeat in this war, but this war taught our country the meaning of diplomacy. which the then Prime Minister Jawaharlal Nehru Couldn’t understand. He himself admitted that he was treating it as just a normal quarrel, which could be ended through dialogue. He made it clear that India was far from reality in its own making. Evidence was present in front of us to some extent, but we ignored it. Behind the defeat in this war, the immediate government was put in the dock, itself President Shri Radhakrishnan made these allegations on the government. It was clearly stated that this war was the result of negligence.

Many pages of history also say that Sardar Vallabh Bhai Patel Always had doubts about China’s intentions. They used to address him on the face, something behind his back. He himself mentioned this to Pandit Jawaharlal Nehru, but Nehru ji ignored this thing too. Perhaps due to these carelessness, China attacked India and India had to face defeat, but this move of China caused a deep blow to its international image.

China attacked India on 20 October 1962, this war lasted till 21 November. India had to face defeat in this war. October 20 is remembered every year as National Solidarity Day (China attacked India on that day). Although China started small attacks on India from 1959 itself. The atmosphere of tension on the border was deepening. Perhaps the reason behind this was that at that time India had Dalai Lama And this thing was not digested by China and it had made up its mind for war somewhere.

India China differences have been going on since the independence of the country. The 1962 war was a border war, but many reasons are given behind it. This war took place on the north-eastern border of India. According to the present situation, this area was Arunachal Pradesh and Aksai (desert area) of China, where this war took place. India is connected to China by the borders of Nepal, Bhutan and present-day Tibet, thus there are three important borders between India and China.

The first indication of this war was received from the border attacks in 1959. At that time, China had first created an atmosphere of war in Ladakh, Kongkala, which India could not understand. After that, in 1962, there was a war for a month in both Arunachal Pradesh of India and Aksai in China. This war deepened more between the high hills. In this war, there were many mistakes in proper decision and action on the part of India, the responsibility of which was told to the officers of the government and important military at that time. On November 21, China declared a ceasefire. India was defeated, but China also announced to leave the occupied territories, only after that the war ended. China’s image at the international level deteriorated, and this war also made it clear that there are many divisions in India’s politics. Due to this war, mutual differences came to the fore and started showing up at the international level.

There were many reasons for the defeat from China, but till date those reasons have not been discussed openly.

After this war, the government of India had to be subjected to intense criticism. The President himself condemned the policies of the government and the defense forces. As a result, Defense Minister Menon was removed from the post on 9 November. Many soldiers were killed in the war, instability started coming in the country. Due to this war, India came to know about the intention of China. The slogan of Hindi Chinese Bhai Bhai was opposed and India understood the importance of diplomacy. A committee was formed to find out the reasons for the defeat, in which General Henderson Brooks and PS Bhagat took appropriate action and the reasons were discovered and written in the Henderson-Brooks-Bhagat report. Which till date has not been kept completely in front of everyone. Perhaps the reason for this was that the main reason for this war was the failure of Prime Minister Nehru.

Many stories are associated with this war. on one of those stories actor salman khan A film has been made, whose name is ‘Tube light‘ Is.