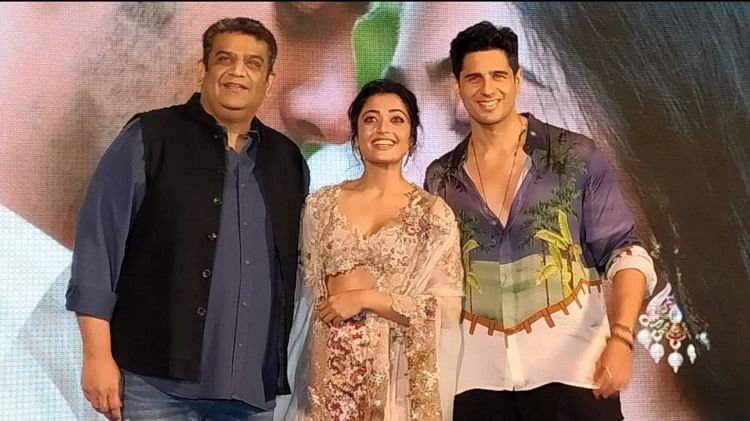 The year 2022 has created a new classification among the stars of Hindi cinema. Earlier the actors were divided into films and television only. Now the sorting of OTT stars has also started from among the film stars. After the film ‘Sher Shah’, Siddharth Malhotra is once again ready to woo the OTT audience with the color of patriotism and next year, when the country will be waiting for the release of RAW agent ‘Pathan’ on the big screen, exactly five days after that. First another agent of RAW ‘Majnu’ will reach people’s homes. The first song of Sidharth Malhotra and Rashmika Mandanna’s new film ‘Mission Majnu’ was released on Sunday evening at Bandra Fort Amphitheater in Mumbai.

On this occasion, actor Siddharth Malhotra said, ‘Films come and go, but songs are remembered forever. I have been a big fan of romantic songs since childhood and Kishore Kumar’s songs are the most among them. The song ‘Keh Doon Tumhe’ sung by him is my favorite song. I love romance with action, be it for the country or for the lady. The story of ‘Mission Majnu’ is inspired by a true incident during the 1971 war.

LIVE Tunisha Sharma Death News Live: Tunisha hanged herself after lunch with Sheejan, director of Fitoor expressed grief
Siddharth Malhotra says, ‘I love the films of the 70s. I got a chance to work in a film with the same background. I have been a huge fan of Amitabh Bachchan’s films in the 70s. Amitabh Bachchan is my favorite actor in action films. But when it comes to love and love, I would like to be Majnu for my country. My grandfather was in the Indian Army, I respect the soldiers of the country a lot.

Himanshi Khurana: Himanshi’s health deteriorated during the shooting, admitted to the hospital after fever and bleeding from the nose
During the conversation, Siddharth Malhotra also revealed that he had suggested Rashmika Mandanna’s name for the role of Nasreen in the film ‘Mission Majnu’. He says, ‘Rashmika’s eyes are very good. When the story of the film was narrated to me, the first thing that came to my mind was Rashmika. Rashmika Mandanna is playing the role of a blind girl in this film. Kajol from ‘Fanaa’ immediately comes to mind after watching the first song of the film, however Sidharth Malhotra says that ‘Mission Majnu’ is a very different film from ‘Fanaa’.

Tunisha Sharma Death: After the death of Tunisha Sharma, there is an atmosphere of fear on the set! Questions arising on the safety of the people
The song ‘Rabba Jananda’ from ‘Mission Majnu’ is released by Zee Music Company. This song is sung by Jubin Nautiyal. Music of this song written by Shabbir Ahmed is given by Tanishk Bagchi. Mission Majnu, directed by Shantanu Bagchi, stars Sidharth Malhotra as a RAW agent. The film will be released on 20 January 2023 on the OTT platform Netflix. Apart from Siddharth Malhotra and Rashmika Mandanna, the film also stars Parmeet Sethi, Mir Sarwar and Zakir Hussain in important roles.