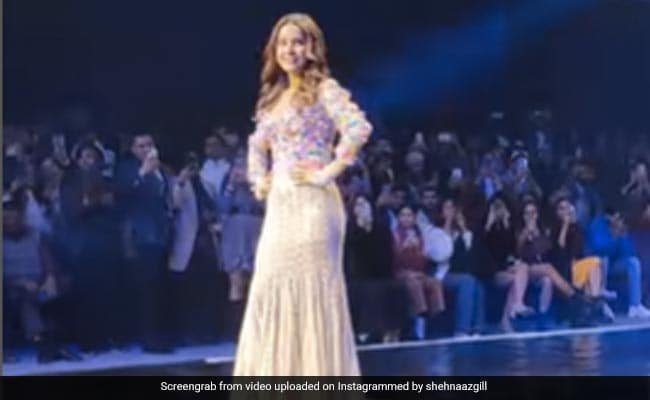 Shahnaz Gill’s naan has been included in the list of one of the most popular actresses of the entertainment industry. Shahnaz, who gained popularity due to her beauty and talent from Bigg Boss 13, is often in headlines due to her style and fashion statement. Recently he did a ramp walk in Delhi. Wearing a very beautiful and stylish western gown, Shahnaz is looking very glamorous. His fans are also praising his look. So let us also show you the very stylish and sizzling look of this Punjabi kudi which raised the temperature of the internet.

Shehnaaz Gill, the very glamorous and gorgeous actress of the entertainment industry, is in headlines these days for one reason or the other. The glamorous avatar of Shahnaz Gill was seen in the recent fashion show held in Delhi. When Shahnaz Gill appeared on the ramp in a very stylish gown of pastel color, her beauty blew everyone’s senses. Her fans are praising her look in western gown. Shahnaz has shared this ramp walk video of her on her official Insta handle. In the video, Shahnaz is wearing a soft pink mermaid gown and her hair is soft curled. Let us tell you that Shahnaz recently became the showstopper for designer Ken Ferns at the Indian Designer Show Season 4 in Delhi.

While sharing this video, Shahnaz Gill wrote in the caption, ‘Thank you everyone’ fans are reading ballads of her beauty after seeing this glamorous avatar of Shahnaz in the video. Making the first comment on the video, Shehnaz Gill’s brother Shahbaz posted a red heart emoji, while the same fans have called her the queen of lakhs of hearts. One wrote, Shahnaz has style and attitude in every act. On the work front, Shahnaz Gill is hosting her own show Desi Vibes these days. Apart from this, Diva will make her Bollywood debut with Salman Khan’s film Kisi Ka Bhai Kisi Ki Jaan.