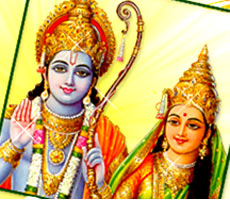 The Ramayana story mentions about the life of Lord Rama and Mother Sita. Both of them were born as ordinary human beings, but their personality was extraordinary. Here we are going to tell you the story of Sita’s self, that how destiny mixes Lord Rama and Sita and what promise does Lord Rama give to Sita Maiya?

Sita Maiya was the daughter of King Janak. really birth of mother sita Earth was born from Maiya, so one of her names is also Bhumija. Sita Maiya’s life was not simple. She used to do many extraordinary things since childhood, one of which was to play with Shiva’s bow, which many great masters could not even shake. This Shiva bow is for the protection of the earth. Lord Vishwakarma was built by Lord Shiva Lord Parshuram given to. Parshuram ji protected the earth many times with this bow and later kept it under the protection of King Janak’s ancestor Devraj. This divine bow was so heavy that even the mighty kings could not move it, but little Sita used to lift it easily. Seeing this scene, King Janak realized that Sita is not an ordinary girl, she is a divine soul, so he decided in his childhood that he would not marry Sita to an ordinary man, but he would be divine for Sita. How to find a man This question was tormenting her often, then she thought that she would organize a swayamvar (the meaning of swayamvar was, in which the girl could herself choose her husband as per her wish.), in which the condition would be kept, that The one who bows to this great celestial bow of the archer Shiva, will be considered worthy of Sita.

According to the condition, the kings of all the states were invited to Swayambar. This invitation also goes to Ayodhya, but Raj Kumar Ram of Ayodhya lives in the forest with Guru Vashisht and from there becomes a part of Swayambar as a meeting audience.

Competition begins, many big kings come up, but they are not able to move that divine bow of Shiva. Even Ravana takes part in this swayambar and is unable to move the bow.

King Janak was very sad to see this. They ask whether there is not a single man in this assembly worthy of my daughter Sita. Will my Sita remain a virgin, because not a single person is worthy of her in this meeting, the bow she used to lift in sports, no one could even shake it in this meeting today, it is a far-fetched thing. The words spoken by Janak are insulting to Lakshman and Laxman gets very angry, he urges his brother Ram to take part in the competition, but Ram says no, that we are all just spectators here. On hearing such kind words of King Janak, Guru Vashistha orders Rama to take part in Swayambar. After getting the Guru’s orders, Shri Ram rises from his place and goes to the divine bow. Everyone’s eyes are fixed on Ram, his muscular body, the brilliance of his head attracts everyone. Shri Ram bows to the bow and lifts it in a jiffy and as soon as he bends the bow to offer the bow, it breaks and falls in two. In this way the condition is fulfilled and flowers started raining from all sides. The deities also shower flowers on Rama from the sky. Sita ji blesses Shri Ram by putting a garland around his neck and celebrations begin in Mithila, but as soon as Lord Parashuram realizes the breaking of the bow. They get filled with anger and reach that meeting of Mithila, due to their anger the earth starts trembling, but as Shri Ram touches the feet of Lord Parashurama and asks for forgiveness. Lord Parashurama understands that in reality Rama is not an ordinary man, but an incarnation of Lord Vishnu. And he ends his anger and blesses Siya Ram.

Marriage Panchami of Lord Rama and Goddess Sita After Sita’s swayambar, her three sisters Urmila, Madhavi and Shutkirti are married to Lakshmana, Bharata and Shatrughan respectively and the four sisters enter Ayodhya together.

On the first night after marriage to Shri Ram, when Goddess Sita was sitting sadly. Then Lord Rama asks him the reason for this misery. Then Sita ji she says, Lord, you are Raj Kumar and Raj Kumar has many wives, you will also be there and then you will forget me. Then Shri Ram promises his wife Sita, that he will never marry again. Will always live life with only one wife. Shri Ram gives this promise to his wife Sita on the first night of marriage, which Sita is shocked to hear. Shri Ram keeps this promise for life. Even when Sita and Rama get separated due to some reason, Maryada Purushottam Rama follows his word and does not marry again.

In this way, Lord Rama and Goddess Sita create a new history of dignity and make mankind aware of the religion of husband and wife through their lives, in this way, these mythological stories tell the basis of religion to man and give a sense of right and wrong. This was the story of Mother Sita’s self, after which a new struggle of her life begins and both of them support each other in the most difficult situation and teach the religion of husband and wife to the human race.