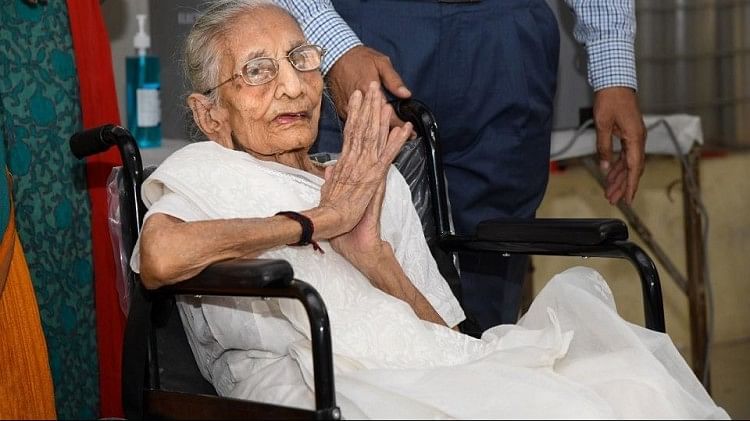 Prime Minister Narendra Modi’s elder brother Somabhai Modi on Thursday said that his mother Heeraben’s condition is gradually improving and she has taken liquid food in the morning. Heeraben (99) was admitted to the super specialty UN Mehta Institute of Cardiology and Research Center here on Wednesday morning due to health issues. Somabhai Modi told news agency PTI that his condition was improving gradually. He is much better today, he has moved his arms and legs. He said Hira Ba asked us, through a signal, to keep her in a sitting position and also take liquid food given by the hospital. The decision regarding his discharge will be taken by the doctors today after getting his CT scan and MRI done. Hiraben, also known as Hiraba, lives with PM Modi’s younger brother Pankaj Modi in Raisan village near Gandhinagar city. The Prime Minister regularly visits Raison and spends time with his mother during most of his visits to Gujarat.

CM of Gujarat reached the hospital again today to know about the condition of PM Modi’s mother.

Health of PM Modi’s mother Heeraba improves, can be discharged from hospital in a day or two

Prime Minister Narendra Modi’s 100-year-old mother Heeraben Modi is improving, two days after she was admitted to a hospital in Ahmedabad, the Gujarat government said today. He can be discharged from the hospital in a day or two. He has also started eating food.

Rituals are being performed across the country for the speedy recovery of PM Modi’s mother. Mahamrityunjaya was chanted in Kashi, while havans were held at various places. People say that the PM has dedicated everything to the country, so it is our responsibility to pray to God for the health of his mother.

Prime Minister Narendra Modi’s younger brother Prahlad Modi has given a lot of information about the health of his mother Hiraba. He said that he has been admitted to the hospital due to difficulty in breathing. However, the condition is stable at present. The doctor’s team is continuously monitoring.

Prime Minister Narendra Modi’s mother Hiraba is still hospitalized. The team of doctors is continuously monitoring. At present his condition is stable. Meanwhile, the latest information about Hiraba’s health has been given by his younger son Prahlad Modi. He told what is the problem? Stay tuned with Amar Ujala for moment by moment updates related to Hiraba’s health…