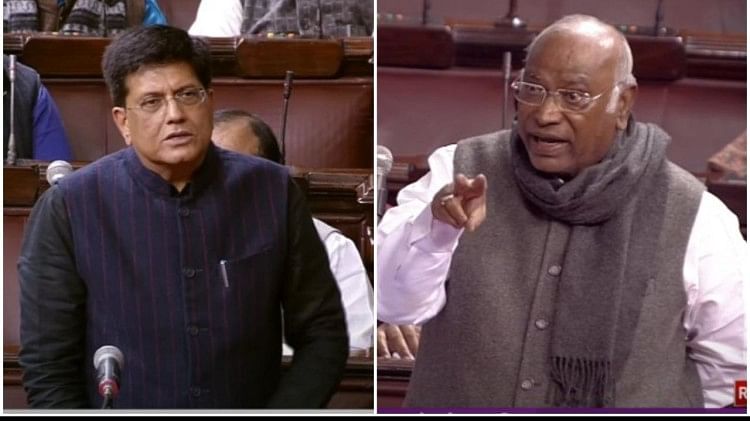 Kharge again attacked the BJP on the demand for apology

When the BJP asked for an apology, Kharge said that if I repeat what I had said outside, it will be difficult for them. The apologists are questioning the people who fought for freedom. I said that Indira Gandhi and Rajiv Gandhi sacrificed their lives. Who among you gave your life for the unity of this country?

On the meeting of the parliamentary party, Union Minister Prahlad Joshi said that this is not the real Congress. The family members of those who fought for freedom are in all parties. This Congress is absolutely fake Congress.

There was a lot of uproar in the Rajya Sabha today over Kharge’s objectionable statement on Prime Minister Narendra Modi. While the BJP demanded an apology, Kharge clarified that he had given this statement outside Parliament. Attacking Kharge, BJP leader Piyush Goyal said that he has no right to be in the House. He said that it was because of the Congress that Jammu and Kashmir has become like this. Goyal said that Leader of the Opposition in Alwar Mallikarjun Kharge had given an indecent speech yesterday. The language used is unfortunate. I condemn the way he used foul language, said baseless things and tried to present lies in front of the country. I apologize to him.

In Alwar, Rajasthan, Congress President Mallikarjun Kharge said that we got freedom for the country and Indira and Rajiv Gandhi sacrificed their lives for the unity of the country. Our party leaders gave their lives, what did you do? Has anyone made any sacrifice in your house? He further said that we want to discuss China’s aggression but the government is not ready for discussion. He talks like a lion on the outside but in reality he walks like a mouse. We are with the country but the government is hiding information.

Giving information on the parliamentary party meeting, Union Minister Prahlad Joshi said that PM Modi insisted on celebrating the year 2023 as International Millets (Bajra) year in the meeting. Millets can promote nutrition campaign. Lakhs of people are coming to G-20, wherever possible we will also keep some food made of millets for them to eat. PM Modi has also called for Millets song competition, Millets essay competition, discussion on Millets in schools and colleges, he has said that this should become a mass movement.

Due to the huge uproar in the Lok Sabha on the issue of China, the proceedings of the Lok Sabha have been adjourned. At the same time, the ruckus of the opposition in the Rajya Sabha is still going on.

BJP MP Brijlal has given Zero Hour notice in Rajya Sabha to discuss the concern of rocket propelled grenade attack in Punjab.

AAP MP Raghav Chadha has given Suspension of Business Notice in Rajya Sabha under Rule 267 to discuss amendments in laws to ensure stricter punishment, such as life imprisonment or some other severe punishment, for the culprits in sacrilege incidents.

Today is the 10th working day of the winter session of Parliament. Even today there are chances of uproar in both the Houses on the issue of China. Apart from this, opposition MPs have given notice of adjournment motion in Rajya Sabha and Lok Sabha on many different issues today. Let us tell you that there are 16 new bills in the agenda of the Center in this session. Stay tuned with Amar Ujala for moment by moment updates related to Parliament…