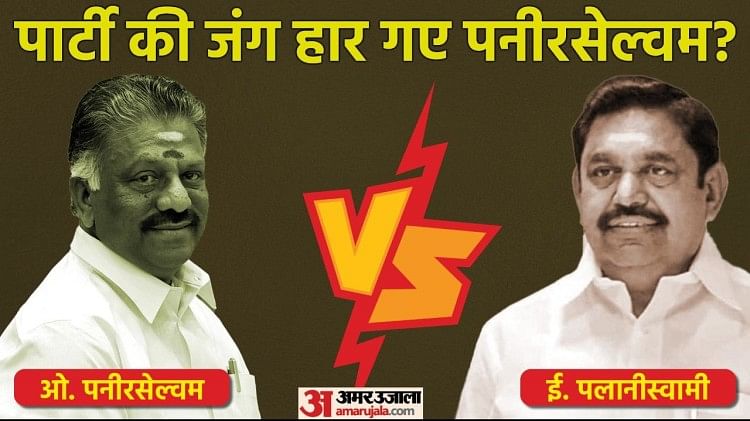 After Maharashtra, now there is a political turmoil in Tamil Nadu. The controversy is taking place over the official occupation of All India Anna Dravida Munnetra Kazhagam (AIADMK). The General Council meeting of the party was held on Monday. In this, E Palaniswami was elected the interim general secretary of the party. Meanwhile, former Chief Minister O. It was also announced to expel Panneerselvam and his supporters from the party.

That was the gist of today’s meeting. Now let us take you to the root of this controversy. They also tell what happened in AIADMK till now? The decisions taken in the meeting held today will also be explained in detail. Read full news…

Know the history of the party first


There used to be a movie star in Tamil Nadu. The name was MG Ramachandran. was very famous. So much so that people were ready to lay down their lives to have a glimpse of him. Everyone was pale in front of him in the Tamil film industry. Along with films, he also used to interfere in politics. He was a member of Congress till 1953. After this Tamil Nadu leader CN Annadurai formed a new party. It was named Dravida Munnetra Kazhagam i.e. DMK. At present there is a DMK government in Tamil Nadu.

MGR also joined DMK in 1953. With the joining of MGR, the party dominated across Tamil Nadu. MGR became a member of the Legislative Council for the first time in 1962. He was elected MLA in 1967. There was also a deadly attack on MGR in 1967.

When MGR formed a new party


It’s 1972. Then Karunanidhi started projecting his son MK Muthu extensively in film and politics. On the other hand, MGR started making allegations of corruption and disturbances in the party. He started asking questions to Karunanidhi from the open platform. Then he was thrown out of the party. MGR formed a new party and named it Anna Dravida Munnetra Kazhagam (ADMK). Which was later changed to All India Anna Dravida Munnetra Kazhagam i.e. AIADMK. After this AIADMK won many elections in Tamil Nadu.

After MGR’s death in 1987, the party split into two factions. One faction was handled by MGR’s wife Janaki Ramachandran and the other by Jayalalithaa. However, Jayalalithaa later declared herself the successor of MGR. After this, Jayalalithaa was also the Chief Minister of Tamil Nadu for a long time. In 2014, Jayalalithaa was convicted and sentenced to four years in the disproportionate assets case. In 2015, he was acquitted by the court and again he took over the post of Chief Minister. He died of a heart attack in 2016.

And then the dispute started over the occupation of the party.

One faction came with party veteran E Palaniswami ie ​​EPS and the other with O Panneerselvam ie OPS. Then a formula was created. Under this, Palaniswami was given the responsibility of Joint Coordinator and Panneerselvam (OPS) Coordinator. The EPS faction wanted full control over the party.


After the meeting of the District Secretary on June 14, the demand for single leadership in the party intensified. Both the factions held talks several times to resolve this but were unsuccessful. The OPS had also written a letter to the EPS asking it to cancel the meeting of the General Committee, citing the party’s confusing condition. However, the EPS did not consider it.

The OPS faction had rejected 23 proposals of members of the General Committee last month. Opposing that Palaniswami’s camp was about to pass a resolution on Single Leadership in its June 23 meeting, Panneerselvam said as per party rules this work cannot be done without his signature.

The EPS enjoys the support of a larger number of party legislators and district secretaries as compared to the OPS. The EPS camp consists of about 75 district secretaries, 63 MLAs and 2190 general council members. And in the midst of the long-running drama, some loyalists of Ops also joined EPS. On Tuesday itself, Tiruvallur district secretary Alexander and Puducherry state secretary Anbalagan also extended their support to the EPS.