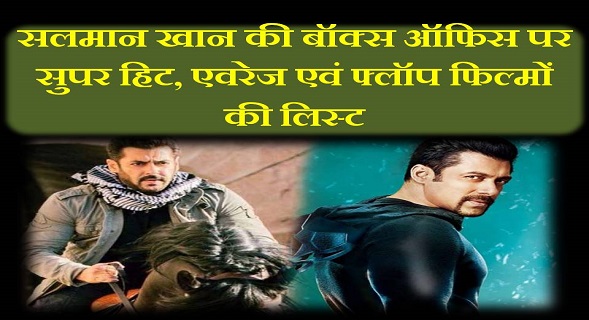 Salman Khan, son of famous filmmaker Salim Khan, has made a distinct identity in the film world ever since he stepped into Bollywood. Salman Khan has given many years of his life to the film world and this is the reason that even after being 52 years old, he has not married yet. It is a fact that there are always discussions about Salman’s love. Recently, on December 20, Salman Khan’s new film ‘Dabangg 3’ has been released. Till now the total earning of the film has crossed 140 crores. Almost all the films of Salman Khan are considered successful films, yet today we are going to tell you about some of his films. These films have crossed the figure of 100 to 300 crores at the box office, these films will be placed in the list of superhit movies.

To know the life of Salman Khan closely Click here

Bajrangi Bhaijaan – In this film, Salman Khan played the role of a Hindu Pandit. In this his name was Bajrangi alias Pawan. He was seen as a true-honest and devotee of Bajrangbali. in this movie Kareena Kapoor Khan also played an important role. The story of this film is such that a Pakistani girl who could not speak goes to Pakistan without a visa to drop her at her home. After that they have to face many kinds of tortures and troubles. Still he does not give up and takes Munni to her destination. The name of the girl who plays Munni in this film is Harshali Malhotra. Nawazuddin Siddiqui’s role is also excellent in this film. This film of Salman is a part of 300 crore club. This film was directed by Kabir Khan.

Sultan – Salman Khan appears as a wrestler in this film and with Anushka Sharma is also visible. Salman Khan’s film has also crossed the 300 crore mark and has made its place in the 300 crore club. Directed by Ali Abbas Zafar, this film is very spectacular.

Salman Khan is counted first among the three Khans of Bollywood. His reason is that all the films of Salman establish a record of their own. Here we are showing the list of his similar 100 crore and 200 crore films. By looking at them, you can understand why Salman Khan is called Khan in mines.

Tiger Zinda Hai The action mode of Salman Khan is shown in this film. It is a sequel to Salman’s first film Ek Tha Tiger. The film crossed the Rs 156 crore mark in the first week itself. After that the film made its place in the 200 crore club. With the help of this film, Salman Khan had broken some of his own records. This film came on 22 December 2017.

Tube light – Salman Khan and Salman Khan’s brother Sohail Khan both played important roles in this film. Salman Khan has played the role of a person in this film who is very gullible and can do anything for his family. Tubelight did not get much response in Indian cinema. Nevertheless, being Salman’s movie, this film has also shared its share in the 100 crore club. But this film of Salman is considered a flop.

Get Prem Ratna Dhan – Salman’s name has also been named Prem in many films. And the name of Prem has also been added to the titles of many of Salman Khan’s films like ‘Prem Ki Deewani’ and now ‘Prem Ratna Dhan Payo’. In me he is just a common man. Well Sonam Kapoor has also played an important role in this film and has appeared as a princess. The film earned Rs 210 crores and in the first week itself the film became a part of the 200 crore club.

kick – By the way, there is a dialogue of Salman Khan that if we are not getting kick in any work, then understand that work is not worth you. In this film, Salman Khan is seen as a very vicious thief. One of his stunts has also gone viral. The film had earned 232 crores in the first week. After earning this, he made his place in 200 crore club.

Film is being made on Shaheed Udham Singh, for complete information Click here

Be victorious – This film of Salman Khan was liked by everyone and is also worthy of praise. The story of this film is fantastic and in this Salman Khan starts a chain that if someone has helped you, then you should help three people in return. Tabu is also seen in this film and as Salman Khan’s sister. Daisy Shah was also seen opposite Salman in this film. The film earned Rs 115 crore in the first week and made its place in the 100 crore club.

Ek Tha Tiger Salman Khan and Katrina Kaif Everyone likes the pair and if both of them are in a film, then there is no question of the film being a flop. This is the reason that there was a Tiger film whose sequel ‘Tiger Zinda Hai’ has also come. The film had earned Rs 199 crore at that time. After this earning, the film had joined the 200 crore club.

By the way, in the 90s, Salman Khan acted in many good films and those films were hits too. These films like – Saajan, Baaghi, Karan-Arjun, Judwaa, Jeet and Biwi Ho To Aisi. These films handled Salman’s career in the 90s and gave him an identity.

In 1999, Salman Khan’s film ‘Hum Saath Saath Hai’ worked in this film and after this film there were many ups and downs in Salman’s career. You will remember that in this film Salman black buck kill There is also an allegation of

Salman Khan’s first film was ‘Biwi Ho To Aisi’, this film was released in 1988. After this, Salman Khan never looked back and worked in more than one hit films. Here we are going to show the list of his average films.

Some of Salman Khan’s films from 2005 to 2009 did good business, in which ‘Partner’ and ‘No Entry’ did good business. In these 5 years, these films of Salman were also successful in making decent collections at the box office, such as films like Jaane Man, Babul, Salaam-e-Ishq, Yuvraj and Marigold earned decent money.

No matter how good an actor or actress someone is, they definitely get defeated somewhere or the other. The same has happened with Salman Khan as well, he has also seen disappointing results of many films. Here we are going to show the list of some flop films of Salman Khan.

Number of movies of Salman Khan