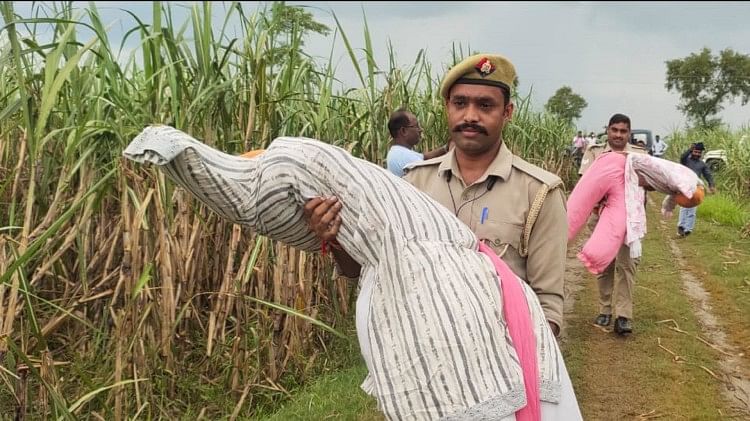 In the case of murder after raping two real sisters, the police recreated the scene by taking four accused to the spot. The accused Junaid, Chhotu, Arif, Hafizur Rahman, who were taken on remand, showed the incident by making an effigy in front of them and interrogated them. There the trial was conducted for about 46 minutes.

During this time no one was allowed to leave. Constable Rajesh, posted in the police station, measured the distance from the bike to the spot. It took about three hundred meters from Lalpur Road to the spot. After conducting the trial there, the accused came to the police station. CO Sanjaynath Tiwari and Inspector-in-Charge Chandrabhan told that only the SP will give information about the entire incident. At present the accused are being interrogated.

During this, the police found the upper part of a SIM card lying at a distance of about a hundred meters from the spot during the investigation. The police is now preparing to send it for investigation. Various discussions are taking place among the people regarding this.

The people of the village, including the mother and wife of the accused Chotu, were standing during the scene recreation. Chhotu’s mother was crying to get a glimpse of him. After the incident, when the policemen took the accused with them, they fell on the spot after not getting a glimpse of them.

this was the case

In the Nighasan of Lakhimpur, two girls were kidnapped from in front of their house by bike-borne youths of another community of the neighboring village. Later the bodies of both the girls were found hanging on the tree in the field. In this case, six accused, including accused Chhotu, who lived in the neighborhood of the victim’s house, were arrested.