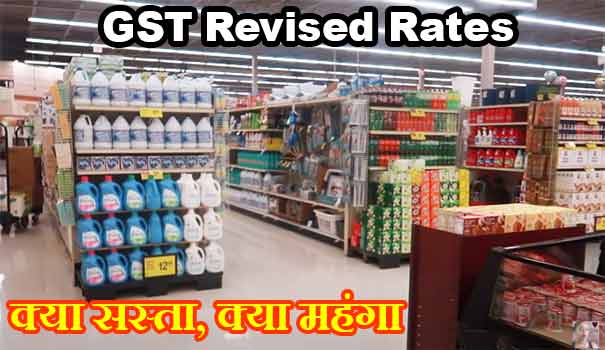 The 47th meeting of the GST Council was held in the last week of June. In which it was decided to change the tax rates on many items. Due to this new tax rate, the prices of many items were likely to be affected. The items on which it was decided to change the rates of tax in this meeting, it is to be implemented from today i.e. from 18th July 2022.

We will try to know with full details about which items will be affected due to the new rates of GST. But it is necessary that if the rates on the goods on which GST rates were low earlier, if they have been increased. So to buy those things you will have to spend more money than before. And the prices of items on which GST rates have been reduced as compared to earlier, can provide you some relief.

The 47th meeting of the GST Council was held in the last week of June under the chairmanship of Finance Minister Nirmala Sitharaman. In this meeting, it was decided to levy GST at the rate of 5% on many packaged food items which were not subject to GST earlier. These include packaged and lean fish, cheese, curd, honey. Lassi, dry soybean, dry makhana, peas, wheat, puffed rice along with other grains are also included.

Apart from this, GST will also have to be paid on hospital rooms whose rent is more than Rs 5000. Hotel rooms whose daily rent is less than Rs 1000 will also attract GST at the rate of 12%. Whereas till now it was outside the purview of tax.

18 july 2022 Inflation can bother you even more

Several food items were brought under the purview of GST for the first time in the GST Council meeting that was held under the chairmanship of Finance Minister Nirmala Sitharaman. However, the rate of GST on these was kept from 5% to 12%. These include packaged and labeled food items like paneer, curd, lassi, fish, honey, peas, hotel room rent below Rs 1000, hospital room above Rs 5000 etc.

And there are also some such services or goods on which GST rates have been increased. These include solar power heaters, printing and drawing ink, paper cutting knives, sharp knives, pencils, sharpeners, LED lights to marking and drawing products. Are included.

which items have increased in price

which items will cost less

Items on which GST rates have been hiked Table

on which GST rates have been reduced