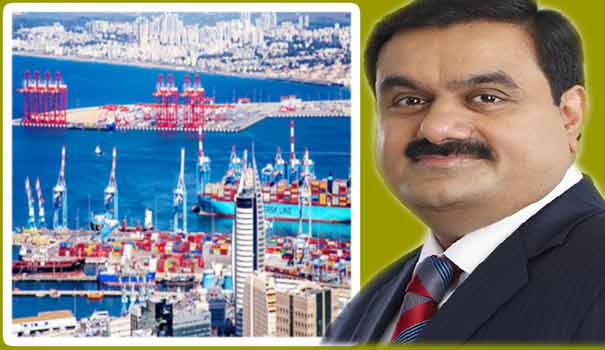 At present Gautam Adani has become the richest man not only in India but in the whole of Asia. However, the names of the rich keep going up and down in the list. But Gautam Adani, sharing an information from his Twitter handle, jumped the shares of Adani Group.

Yes Asia’s richest man Gautam Adani In his tweet, he expressed happiness that he, along with his business partner Gadot, has won the bid for the privatization of Haifa Port of Israel. That is, now the responsibility of this port will be handled by the Adani Group and its partner Gadot.

This person has already dominated in India, but now Gautam Adani wants to expand his business in foreign countries as well. In this regard, he has got a big success. In fact, the government of Israel wanted to privatize the historic Haifa Port there. For this, he had applied to companies from all over the world to participate in it.

In which Gautam Adani’s company Adani Group also participated. And now the news is that Adani Group along with its partner Gadot has won the bid. And as soon as this news was published by the official channel of the Government of Israel, the shares of Adani Port saw an increase.

How much was the deal finalized

As we have mentioned earlier, as soon as the Israeli government decided to privatize its largest and historic port, Haifa Port, it invited companies from all over the world to bid in it.

But the deal was won by the Adani Group along with its partner local chemical and logistics group Gadot. According to the information, this deal was concluded for about 4.1 billion shekels, which is equal to 1.18 billion dollars.

And if it is converted into Indian rupees, then this deal was completed in about 9500 crores. Israel’s Haifa Port is the largest port on the Mediterranean coast.

What will be the share in both the associates

What did Gautam Adani say about this deal?

First of all, the information about the completion of this deal was given by the Government of Israel. And after that Gautam Adani also expressed happiness by giving information about this from his Twitter handle. He wrote that “Adani Ports India is delighted to win the bid for privatization of Haifa Port along with its partner Gadot.

This is very important for both India and Israel. We are proud to be part of the Port of Haifa where Indians led through the Cavalry Charges in the year 1918. However, the responsibility of Adani Ports of India is being handled by Gautam Adani’s son Karan Adani.

What Israel has to say about Haifa privatization

On this occasion, Israeli Finance Minister Avigdor Lieberman says that “Privatization of Haifa, Israel’s largest port, will increase competition at ports, which will directly benefit the people.”

The cost of living for the people will come down, and we hope that this will also bring down the prices of importing. Apart from this, the long time taken in port processing will also help in reducing that time.