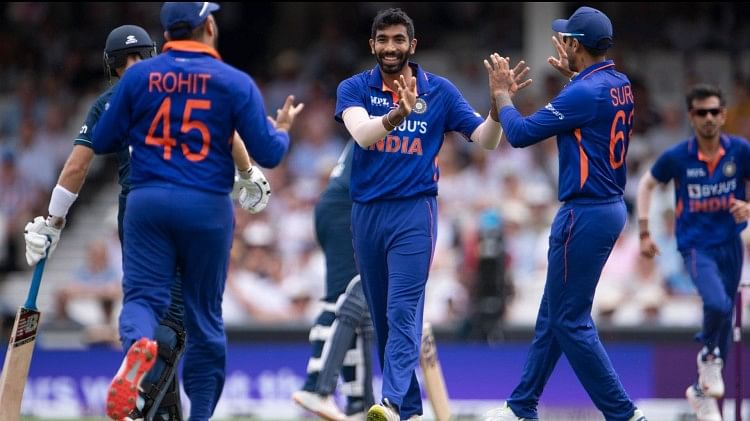 Seven England batsmen have been dismissed on the score of 59. Mohammed Shami got England captain Jos Buttler caught by Suryakumar Yadav on the score of 30 runs. Now the England team is in trouble. Craig Overton is at the crease with David Willey.

Famous Krishna has given the sixth blow to the England team. He sent Moeen Ali to the pavilion on the score of 14 runs. Krishna caught Ali off his own ball. Now the England team is looking in trouble. David Willey is at the crease with captain Jos Buttler.

England’s score has crossed 50 for the loss of five wickets. Moeen Ali and Jos Buttler have taken charge of England’s innings after a poor start. 27 runs partnership has been done between the two. Ali is playing on 14 and Butler is scoring 24 runs.

After the first 10 overs, England’s score is 30 runs for the loss of five wickets. Captain Jos Buttler and Moeen Ali are at the crease. Jasprit Bumrah has taken four and Mohammed Shami has taken one wicket for India. Rishabh Pant gave life to Moeen Ali off Jasprit Bumrah. Had Pant caught the catch, Ali would have been the fifth England batsman to be dismissed without opening the account.

Jasprit Bumrah has given the fifth blow to England. He sent Liam Livingstone to the pavilion for zero. Livingstone was clean bowled on Bumrah’s coming yorker. He is the fourth batsman from England, who has not been able to open an account in this innings. At the same time, this is Bumrah’s fourth wicket in this match. After eight overs, England’s score is 26 for five.

IND vs ENG Live: Jonny Bairstow out for seven

Three England batsmen have returned to the pavilion without opening the account. After Jason Roy and Joe Root, Ben Stokes has also been dismissed for zero. Mohammed Shami got him caught by Rishabh Pant. Now skipper Jos Buttler and Jonny Bairstow are at the crease. After four overs, England’s score is 16 runs for three wickets.

Jasprit Bumrah got India off to a great start with two wickets in his very first over. After clean bowling Jason Roy, Joe Root was also caught by wicketkeeper Rishabh Pant at the score of zero. England’s team is in trouble after falling two wickets in three balls. Ben Stokes is now at the crease with Jonny Bairstow.

England’s batting has started. Jason Roy and Jonny Bairstow have opened the innings. Mohammed Shami is doing the first over for India. In the first over, England scored six runs for no loss.

IND vs ENG Live: India won the toss and elected to bowl

India captain Rohit Sharma has won the toss and decided to bowl first. Virat Kohli is not playing the match due to injury. He has groin problem. Shreyas Iyer will bat at number three in his place. The Indian team is playing with five batsmen, two all-rounders and four bowlers. At the time of toss, captain Rohit Sharma said that there is little grass in the pitch and there are clouds in the sky. Bumrah and Shami can swing the ball. That’s why he wants to put pressure on England by taking a few wickets in the opening overs. In this match, he wants to chase the target.

Hello, welcome to Amar Ujala’s live blog. The first match of the three-match ODI series between India and England is at the Kennington Oval in London. After winning the T20 series, India would like to start with a win in the ODI series as well. India’s record against England in ODIs is excellent. A total of 103 matches have taken place between the two teams. Of these, 55 have been India’s and 43 England’s names. Three matches were inconclusive and two matches ended in a draw.

Team India has so far won the ODI series in England only three times. The last time India won an ODI series was eight years ago in England. This series held in 2014 was won by Team India by 3-1.