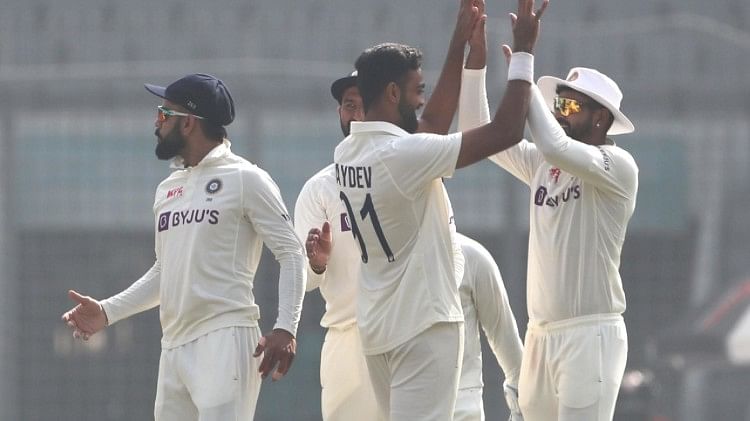 By lunch on the third day, Bangladesh have scored 71 runs at the loss of four wickets. This team is still 16 runs behind India. Zakir Hasan and Liton Das are at the crease. India have taken four wickets in this season and have tightened their grip on the match. Now Team India would like to get Bangladesh out early and win this match on the third day itself. Ashwin, Akshar, Unadkat and Siraj have taken one wicket each in this innings for India.

India have to take six wickets, while Bangladesh team will try to put a big target in front of India by ending the lead of 16 runs. On getting a small target, India can win the match on this day itself.

Akshar Patel has given the fourth blow to Bangladesh. He lbw out Mushfiqur Rahim. Rahim scored nine runs in 19 balls. Liton Das is now at the crease with Zakir Hasan.

Bangladesh got their third blow on the score of 51 runs. Shakib Al Hasan has been dismissed after scoring 13 runs in 36 balls. Jaydev Unadkat got him caught by Shubman Gill. Now the Bangladesh team is in trouble. India still have the edge and three important Bangladesh batsmen are out. Bangladesh’s score is 66 for three after 30 overs.

Bangladesh’s score has crossed 50 runs on the loss of two wickets. Shakib Al Hasan and Zakir Hasan are at the crease. Shakib is once again scoring runs at a brisk pace and getting his team in a better position. India still has a good lead.

Bangladesh’s second wicket has fallen on the score of 26 runs. Mohammad Siraj got Mominul Haq caught by wicketkeeper Rishabh Pant. Mominul scored five runs in nine balls. Bangladesh’s score is 26 for two after 13 overs. Now captain Shakib is at the crease with Zakir Hasan.

The Indian team has lost two reviews inside five balls. First Ashwin’s ball was going over the stumps and India took the review. After this, Siraj’s ball fell outside the leg stump and India took a review on this too. Now Team India has only one review left. However, in the meantime, Team India also got the first wicket through the review. Bangladesh scored 22 runs in the second innings losing one wicket in 12 overs.

Ravichandran Ashwin has given the first blow to Bangladesh in the second innings. He dismissed Najmul Hasan Shanto lbw. Shanto scored five runs in 31 balls. Ashwin had hit Shanto’s pad even before this ball and India had also taken a review after the umpire’s refusal, but then the ball was going over the stump and India’s review was wasted. This time also the umpire did not give out to Shanto. At the behest of Ashwin, captain Rahul took a review on the second consecutive ball and India got its first success.

IND vs BAN 2nd Test Day 3 Live: What happened so far in the match

Batting first after winning the toss, Bangladesh started well and Nazmul Hasan and Zakir added 39 runs for the first wicket. Jaydev Unadkat, who returned to Test after 12 years, gave India the first success. He got Zakir Hasan caught by Lokesh Rahul. After three balls, Ashwin sent Shanto to the pavilion. Mominul and captain Shakib shared a 43-run partnership for the third wicket. Umesh broke this partnership by dismissing Shakib. After this, the Bangladesh team kept losing wickets at regular intervals.

Mominul stood firm at one end, but wickets kept falling from the other end. Mominul shared partnerships of more than 40 runs with many batsmen, but could not make a half-century partnership. Mominul Haque scored the highest 84 runs for Bangladesh. Mushfiqur Rahim, who scored 26 runs, was the second most successful batsman of the team. Liton Das scored 25 and Shanto scored 24 runs. Umesh Yadav and Ravichandran Ashwin took four wickets each for India. At the same time, Jaydev Unadkat got two wickets. In the end, the Bangladesh team was reduced to 227 runs.

What happened in India’s innings?

India’s start was nothing special in reply to Bangladesh’s 227. Captain Lokesh Rahul got out after scoring 10 runs. Shubman Gill got out for 20 runs. Cheteshwar Pujara and Virat Kohli returned to the pavilion after scoring 24 runs. India’s four wickets had fallen for 94 runs. Of these, Taijul Islam took the first three wickets and put Team India in trouble.

After this, Shreyas Iyer and Rishabh Pant took over the Indian innings, sharing a 159-run partnership for the fifth wicket between the two. However, both the players missed out on the century. Pant scored 93 off 105 balls and Iyer scored 87 off 105 balls. Both of them took India’s score from 94/4 to 253/5. However, the Indian innings faltered as soon as Pant was dismissed. India lost its last six wickets for 62 runs. India’s tail batsmen could not do anything special in this match.

Shakib Al Hasan and Taijul Islam took four wickets each for Bangladesh. Taskin Ahmed and Mehdi Hasan Miraj got one wicket each.

Bangladesh scored seven runs in the second innings without losing any wicket. India still has a lead of 80 runs. Zakir Hasan and Shanto of Bangladesh are present at the crease.

IND vs BAN 2nd Test Day 3 Live: Bangladesh score 71/4 in the second innings till lunch on the third day, 16 runs behind India

Hello, welcome to the live blog of Amar Ujala. The second and final Test between India and Bangladesh is being played at the Sher-e-Bangla National Stadium in Dhaka. Today is the third day of the competition. This day can also prove to be decisive. The Dhaka pitch has been helping the bowlers since day one. After the end of two days’ play, India has a lead of 80 runs. Today Indian bowlers can wrap up Bangladesh on a small score. On getting a small score, Team India can chase the target today itself.