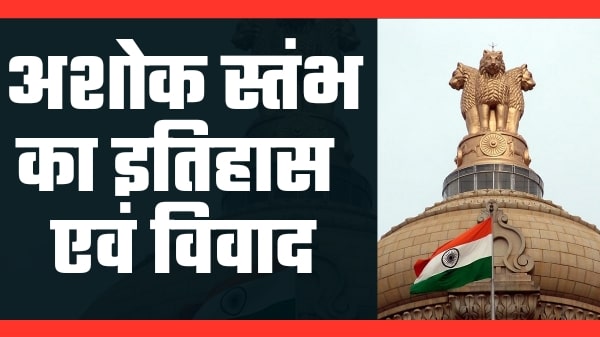 of country Prime Minister Shri Narendra Modi About 20 feet high Ashoka Pillar installed on the roof of the Parliament House was unveiled by the Congress, which is being discussed all around. However, after the unveiling of the Ashoka Pillar, there was a dispute about it. Various types of comments were made on Prime Minister Narendra Modi by various political parties.

The Indian Constitution was adopted in our country on 26 January in the year 1949 and it was adopted on 26 January in the year 1950 and on this day the Ashoka Pillar was also adopted constitutionally by the Indian Government as a national emblem. was. But the history of Ashoka Pillar does not end here only. Emperor Ashoka was ruling in India in 273 BC and he was considered a very dreaded king.

But due to the horrific massacre in the war of Kalinga Emperor Ashoka He was very sad and left the entire monarchy and embraced Buddhism.

However, many people still must be thinking that why the lion has been kept in the Ashoka Pillar? So let us tell you that Lord Buddha has been considered synonymous with lion because the names of 100 names of Lord Buddha include Shakya Singh and Nar Singh.

Apart from this, the sermon given by Lord Buddha in Sarnath is also known as Singh’s thunder. This is the reason why the lion was included in the Ashoka Pillar.

In India, only such people can use the Ashoka Pillar who are sitting on constitutional posts. The President of India, Vice President, Prime Minister, Union Minister, Lieutenant Governor, Governor, Judiciary and high officials of Government Institute can use Ashoka Pillar.

However, it is also very important here that no former officer, former minister, former MP or MLA will be able to use the Ashoka Pillar without permission. If the Ashoka Pillar is used by a common citizen, then he can be imprisoned for 2 years as well as he can also have to pay a fine of ₹ 5000.

After the unveiling of Ashoka Pillar by Modi ji, what has been said by which leader? Let us know about it below.

As soon as the Ashoka Pillar on the roof of the new Parliament House was unveiled by Modi, a controversy arose over it. All India Majlis-e-Ittehadul Muslimeen Party chief Asaduddin Owaisi tweeted on Twitter that “Modi ji should not unveil the national emblem on top of the newly constructed Parliament House”. The responsibility of representation lies with the Speaker of the Lok Sabha, which is not under the government. This is the reason why the PM has crossed the limits of all constitutional norms.”

Owaisi’s statement was also attacked by BJP. It was said by the BJP that Asaduddin Owaisi is always in a state of trouble. BJP spokesperson Sudhanshu Trivedi said that Owaisi sees problems in everything and always keeps negative thinking.

This act of Prime Minister Modi ji has also been termed as illegitimate by another MP of Congress party, Mahua Moitra. He has also posted the old photo of Ashoka Pillar on Twitter, along with the new photo. According to him also this act done by Modi ji is not right.

After adopting Buddhism, Emperor Ashoka traveled in many areas and got the pillar built. In this way, pillars were built by Ashoka at different places. The Ashoka Pillar built by Emperor Ashoka is present in Sarnath, Delhi, Vaishali, Sanchi.

Q: What does the Ashoka Pillar symbolize?

Q: Where is Sarnath?

Q: How many animals are there in Ashoka Pillar?

Q: What is the number of pillar inscriptions of Ashoka?