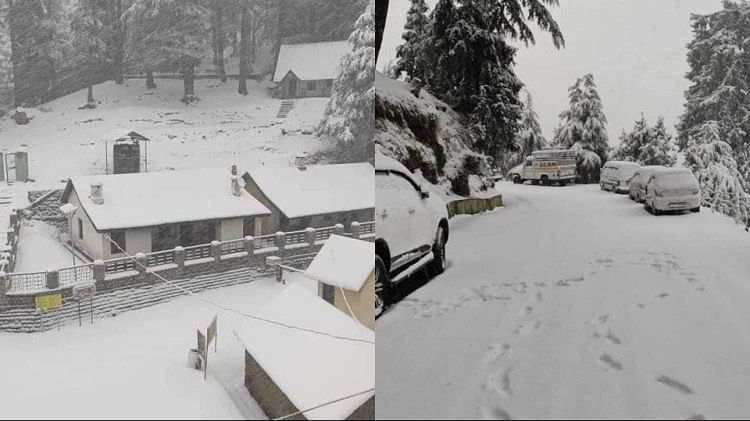 Snowfall continues in Himachal Pradesh as the weather changes. Several peaks including Rohtang and Pangi in the higher reaches of Himachal Pradesh received snowfall. There has been snowfall in Fahe, Kufri, Narkanda and Hatu Peak along with drizzle on the ridge plain of capital Shimla. The higher peaks of Lahaul, Manali, Chamba and Sirmaur also received snowfall. Due to snowfall in Rohtang Pass, the police administration has banned the movement of vehicles beyond Nehru Kund on the Manali-Leh road from late Thursday evening. The view after snowfall in District Chamba Tribal Area Pangi is worth seeing. Solang Valley received four inches of snowfall. On the other hand, heavy snow is falling in Khajjiar-Lakkadmandi.

At the same time, the Atal Tunnel has been closed for traffic due to heavy snowfall. Tourists are not being allowed to go beyond Nehrukund. In many areas of the state, the cold has increased due to light rain and snowfall on the peaks. There is a forecast of snow in the higher areas and rain in the lower areas on Friday as well.

Due to snowfall in the lower areas of Lahaul along with Rohtang Pass, Kunjam Pass, Baralacha Pass on Thursday, there has been a huge drop in the temperature. Fog has fallen in other areas along with Atal Tunnel Rohtang, Jalori Pass.

The district administration of Kullu and Lahaul has instructed the tourists and common people not to go towards the high altitude areas in view of the weather. Pangi, Bharmour, Manimahesh, Chaubia, Kugti, Supa, Tunda, Ghataur, Quarsi tribal areas of Chamba have received snowfall of five to seven centimeters.