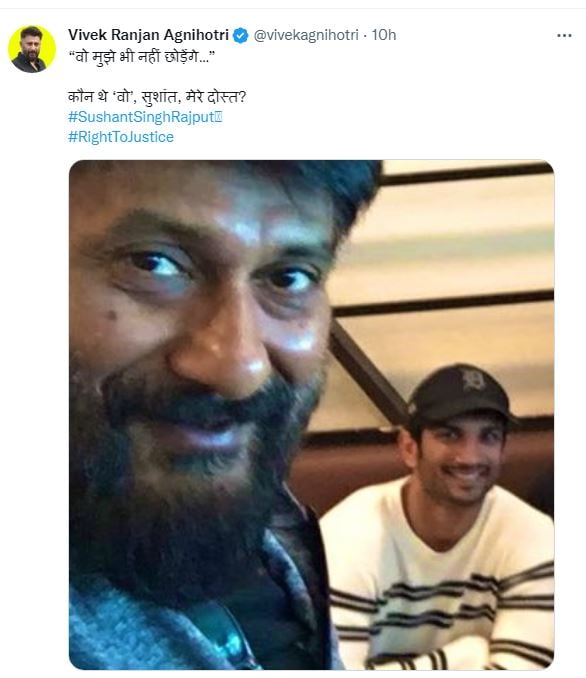 Mumbai: Sushant Singh Rajput It has been two years since his death, but the mystery of the case does not seem to be resolved yet, rather it seems to be getting entangled once again. After the sensational revelations of the Cooper Hospital employee, Sushant’s sister has also demanded an inquiry into the matter, while Vivek Agnihotri, director of ‘The Kashmir Files’, has asked questions by sharing a selfie with Sushant on social media.

Vivek Agnihotri has shared a selfie with Sushant Singh Rajput on Twitter. In this selfie, Sushant is seen smiling in his familiar style while sitting behind. Sharing this picture, Vivek wrote in the caption, ‘He will not leave me, who was ‘that’ Sushant my friend? By sharing this post, Vivek has hashtagged Sushant Singh Rajput and Right to Justice.

Vivek wants to know about whom Sushant used to talk
Please tell that after the death of Sushant Singh Rajput on June 14, 2020, the actor’s friend Smita Parikh had told that he started getting worried after the death of his manager Disha Salian. Told his sister that he would not leave them.

Mumbai Police accused of non-cooperation
At the same time, in this case, former Bihar Director General of Police Gupteshwar Pandey has alleged that the Mumbai Police did not cooperate with the team of officers sent from Bihar. If I had got 15 days, the matter would have been resolved and the matter would not have been handled the way it is being done.

Employee claims ‘murder’
Please tell that Roop Kumar Shah, a former employee of Cooper Hospital, had told ANI that he was on duty at the mortuary on June 14-15. This employee also claimed that when the dead body was brought, there were injury marks on it. It was also said during the postmortem that it is not a case of suicide. While in the job, I had nothing to say at that time.