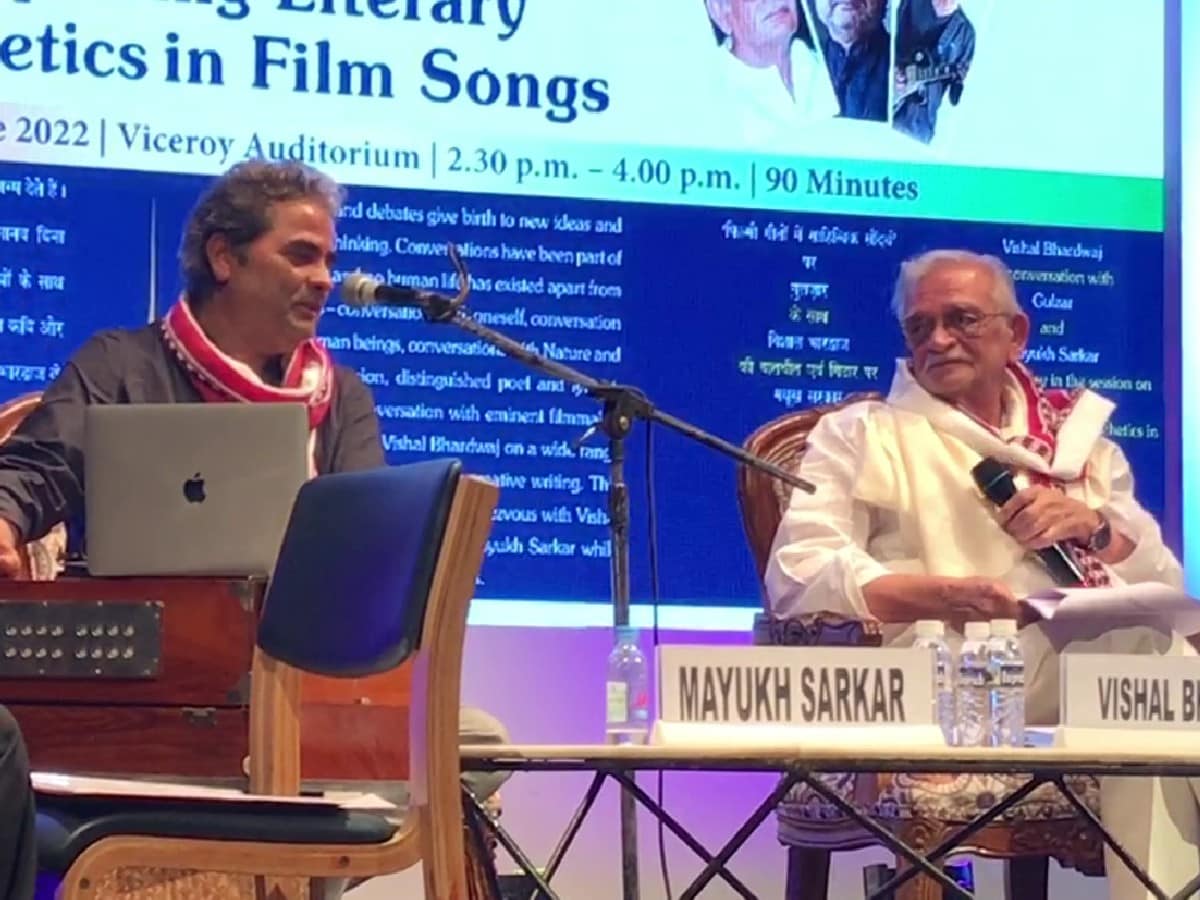 Shimla. Gulzar and Vishal Bhardwaj, two stalwarts of art, literature and cinema at the International Literature Festival in Himachal Pradesh’s capital Shimla, told that film songs should not be limited to entertainment but also to awaken power and society. Both the veterans have written many songs on issues related to social concern, they explained about it in detail in the literature festival and also gave examples. On the second day of this festival, veterans gave a message during a session that it is necessary for people associated with literature, art and cinema to discharge social responsibility.

During the session “In Conversation Exploring Literary Aesthetics in Film Songs” on the second day of the festival at the Gothic Hall of Gaiety Theatre, Gulzar revealed that the song ‘Bidi Jallai Le Jigar Se Piya’ in the film Omkara was used as an item song. It is known that in reality it was written on the suffering of a class which was exploited. Due to exploitation and despair, the victim’s liver catches fire.

Gulzar also mentioned the song of the film Aandhi
Gulzar referred to a song from the movie Aandhi, in which 5 years’ account was sought from Satta. He also recited the line of the song ‘Salaam kaye aali janab aaye hai, 5 saal ka bacha dene dene aaye hai’, to which the people present in the auditorium applauded. Gulzar told the public about the power of votes that the people sitting in power come every 5 years to give the account and the public should take the account.

There is great power in one vote… Gulzar
He said that there is great power in a vote, which now every Indian understands. He said that our ordinary citizen now understands everything, he also knows that one vote means taking the responsibility of the whole of India. Gulzar gave a message to the people to unite to fight against every evil. On this Vishal Bhardwaj sang the song Bandobast Hai, Bandobast Hai from the film Hu Tu Tu. Vishal Bhardwaj gave a message that how the general public has an answer to every question and a solution to every problem. When he asked the people sitting in the auditorium to sing this song with him, then people also sang it.

Gulzar and Vishal’s jugalbandi, there was a lot of applause
At present, on the hatred spreading in many places in the country, Gulzar said that it has to be understood that this is not a problem of any one, two or any group, but of the whole society, of the whole country, every common person is mentioned in it. He said that my appeal is that everyone should be aware of this… On this Vishal Bhardwaj sang the song Jagte Raho, Jagte Raho. Both told how they have written songs according to the story in their films, after understanding every situation, have written and sung songs according to that situation.

He told how Ishqiya wrote the song Ibne Battuta, in this song the speed breaker while walking on the road, used the words and words written in the sign board to avoid the accident. Apart from this, shared the experience of writing many songs. Vishal Bhardwaj added a lot of color to the session through his singing.