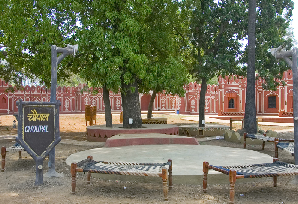 In today’s time, every person is running, today’s heavy work and the competition to be the first in that work tire the person badly. The way the body needs rest and food after continuously working. Similarly, the mind and the mind also need rest, for that entertainment is needed. Entertainment is very important to keep working continuously. Today we are telling you about some such means of entertainment.

According to the time and civilization, the means of entertainment have been changing. In earlier times, things like television, mobile phones, internet, etc. were not available. There used to be many other means of entertainment, which people used in different ways. Earlier people used to entertain themselves by using things according to their hobbies through horse riding, chess, chaupal, dholak, and many other regional music.

We tell you here how the means of entertainment were used –

Many people in the village used to gather at one place in free time and used to entertain themselves and refresh themselves by using dholak, harmonium, and many other musical instruments. Any person who was expert in a particular thing in the village, he used to perform that thing in the Chaupal in front of the whole village and the rest of the people were entertained.

Earlier people used to give great importance to sports, then there were chess, wrestling, kabaddi, dice, cricket and many more. In the evening, children used to play many types of games in the ground near the house. The elders also used to organize sports competitions by gathering on the day of the holiday. In earlier times, sports used to be the main part of life.

then time changed wonders of science From this world came new means of progress. One thing came more than all these means, which is called television and the special running in it. Doordarshan, Doordarshan changed the way of entertainment and started entertaining every morning, evening, night. Doordarshan became very much liked by showing songs, music, news, movies, children’s programs and many health related programs.

At the same time, radio, Walkman (music with headphones), VCR and many other entertainment tools were invented and people started enjoying those things and started making themselves happy. The field of entertainment has always been on the way to progress, and from time to time it has been inventing new means.

Today, there has been a lot of progress in the means of entertainment, there are entertainment items everywhere, which are easily available.

Internet is the biggest medium

Lots of channels in Smart TV –

There are many channels available on TV in today’s time. Today, sitting in front of the TV, we get confused that what to see and what not to see? News, comedy, movies, children’s programs, women’s programs, all kinds of different channels are available, just at the press of a button, the desired entertainment comes to the fore.

Earlier, where only one movie was used for our entertainment at a time in a cinema hall, today many movies can be played simultaneously, which is called multiplex theatres. If there is more than one option, we can choose it according to our desire and entertainment.

Life becomes dull without entertainment, there is no passion for work. It is very important to give rest to the mind to maintain new enthusiasm, thinking, it is necessary to keep the mind happy, and all this is possible only through entertainment. You should keep your mind entertained by taking some rest from work.