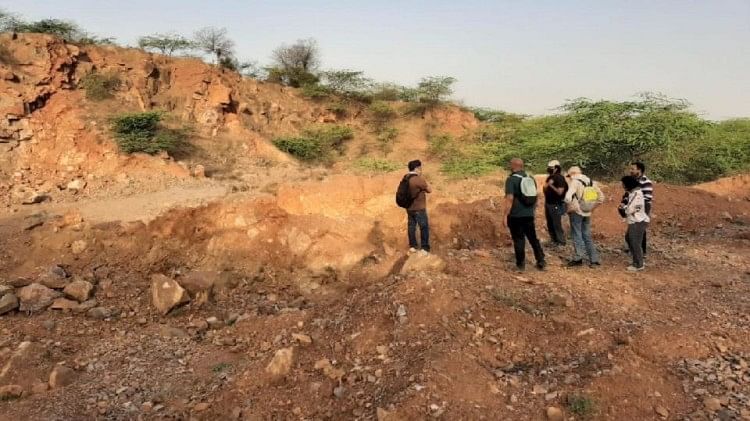 The murder of DSP in Tavadu has created a sensation in the entire state. Millions of business is done in stone mining. Aisa Hum Nahi, this is the claim of those who were nabbed by the Crime Branch Sector-65 from Gurugram-Faridabad road last month. The police had exposed this gang of mining mafia. In this, the residents of Pali village, Somveer and a tea vendor named Chandrapal were arrested. During interrogation of the accused, it came to light that due to the profit of crores in stone theft, the criminals are ready to take the biggest risk. The accused had kept a watch on the movement of the officials of the RTO department to hack the entire system. As soon as the officers came out of their office, the henchmen of the accused used to send information on the WhatsApp group. Transporters, drivers and kingpins were attached to the group. In this entire network, hefty bribes were paid to officials from the police to the mining department and the RTO. Police Commissioner Vikas Arora has so far started a departmental inquiry against seven policemen including the then Suraj Kund police station in-charge Sohanpal, Pali police outpost in-charge, green field outpost in-charge.

60 lakh per month to an officer

In the investigation of the crime branch so far, it has come to the fore that in stone theft, each officer was given 50 to 60 lakh rupees every month. According to sources, the names disclosed by Somveer, a resident of Pali village, are all district level officers. This includes officers from the mining department to RTA and police. The name of Balram, the mining officer of the mining department, has also come up in the investigation. Balram’s role is also doubtful because he comes back to Faridabad within a few months despite being transferred several times.

How does a stone become precious?

On the condition of anonymity, a mining official said that the whole game in stone is of theft, 10 to 12 tonnes of goods are loaded on a truck which is close to four tonnes. After making a four ton bill, the rest is stolen goods. The police do not have the power to challan them. Its power was given to the police for a few months. At that time the revenue of crores was given by the police to the department. Power was withdrawn from the police about three months ago. If the overloaded truck is caught for the first time, there is a provision of 4 and a half lakh, in the second time eight lakh, in the third time 16 lakh and in the fourth time there is a provision to seize the vehicle. A hefty amount is given every month to avoid hefty challans. When the pressure increases, instead of challaning, the mining officers leave the car in two days after getting an FIR. The driver starts driving again after bail.

The process of illegal mining from the Aravalli hills in Surajkund to the Yamuna river continues despite the ban. From January to mid-July, the Faridabad police have registered 38 cases of illegal mining. Faridabad’s Surajkund to Aravali is from Gurugram. Apart from this, Yamuna river flows in about 60 km area of ​​Faridabad and Palwal districts. No contracts have been awarded. Despite this, sand is easily available. Social activists have filed petitions in the Supreme Court and NGT many times to stop the secretive mining in Aravali.

The department has registered 332 cases against stone thieves. The mining and RTO officials are being investigated by the police. To crack down on the mining mafia coming through Rajasthan and Mewat, the cooperation of the police from other states will also be taken. A big campaign will be launched soon. Moolchand Sharma Transport and Mining Minister Haryana