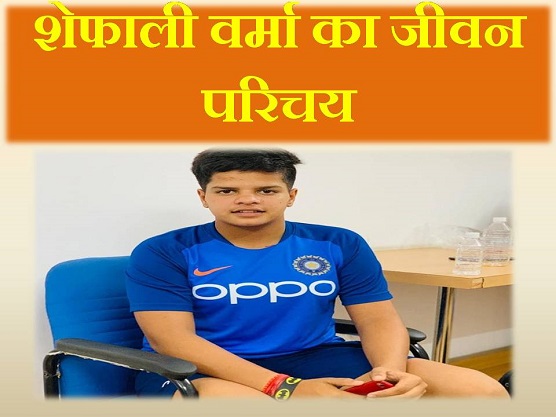 All of you must have seen the craze of Indian cricket among the citizens of India. Till date you must have seen only boys playing cricket but hardly you would know that now a girls cricket team has also been formed in India. In view of the growing enthusiasm of cricket among girls, now in India too, girls have started setting their bat in the cricket field, one of those women’s cricket whose name is Shefali Verma, today we are going to tell you about it.

Who is Shefali Verma

A girl who is internationally recognized as a female cricketer who is a right-handed batsman. Shefali Verma, showing the wonder of off-spin with the right hand, has today illuminated the name of her Haryana in the whole country. She has shown that women can also play a game like cricket, at present she presents herself as a female cricketer for the domestic cricket team Haryana.

A bang female batsman was born on 28 January 2004 in a small Rohtak district of Haryana. Shafali Verma’s father has been interested in cricket since the beginning, he used to play cricket and also wanted to play internationally, but his circumstances never allowed him to move forward. When he saw this madness of cricket inside his daughter, he also started training his daughter at home. Later he also realized professional training, so he tried to get Shefali admitted in many academies for professional training.

But Shefali was a girl so how could she play with boys. The small spirit of the society prevented him from getting admission in any academy. But despite the small thinking of the society, Shefali and her father did not stop from fulfilling their dream. Shefali’s father got her hair cut at the age of 9 and gave her the form of a boy. Soon after that, Shefali was enrolled in a professional academy and she started taking cricket training in a professional way.

To know about the life of Cricketer Aniket Choudhary Click here

He remained in the shape of Tomboy for many years, but later when the Women’s Cricket Academy was formed in India by eradicating this discrimination of women, then Shefali enrolled in a women’s academy. Despite this, Shefali’s father’s relatives made a lot of critical comments on teaching cricket to the girl, even after which Sanjeev did not stop and made his daughter a brilliant female cricketer with all her efforts.

Due to her excellent performance, she got admission in the domestic women’s cricket team of Haryana. First she illuminated the name of her state Haryana and later she got a chance to show her performance under the Women’s Mini IPL 2020, at that time Mithali Raj was the captain of the team, Shefali was also included in that Velocity team. Due to its excellent performance, the team of Velocity reached the final section of this tournament. But even after his best efforts, the Velocity team was defeated by the Supernova team led by Harmanpreet Kaur.

To know the records of Virender Sehwag Click here

Due to consistent good performance, it did not take long for Shefali to reach international cricket. In the year 2019, under the T20 series, Shefali got a chance to play a match against the women’s team of South Africa. When the former captain of the Indian team Mithali Raj She took herself out of T20 cricket, then after that Shafali got entry in that team. Internationally, Shefali showed her strong performance and fulfilled her father’s dream by becoming an international cricketer. At the age of just 15, she also registered her name as the youngest female cricketer in the international team.

She was the second woman in India to have shown her cricketing performance internationally at the youngest. Earlier in 1978, at the age of 14, a woman named Gargi had first made this record in her name. The same record is recorded in the name of the men’s cricket team Message Sachin Tendulkar, who showed his best performance in India’s international cricket at the age of just 16.

Internationally, Shefali did not give much performance during her first match and she got out for zero, after that the coming 2 March of that series was canceled due to rain but during the fourth match, Shefali did the best. And everyone’s heart was captivated by the stellar performance. During that match, opening on 1 October 2019 at Surat ground, he scored 46 runs in the best batting of just 33 balls with five fours and two sixes.

To know the records of Virat Kohli Click here

Some interesting facts about Shefali Verma

The women of India have always shown the best performance that the women of India are not behind the women of any country. Some such great performances, Shefali has also shown the name of the whole country once again with her excellent batting on the cricket field. India has become an inspirational name for every girl. If the little girls of today want to learn something from them, then try to learn their passion and courage which they have earned at the age of just 15 years.