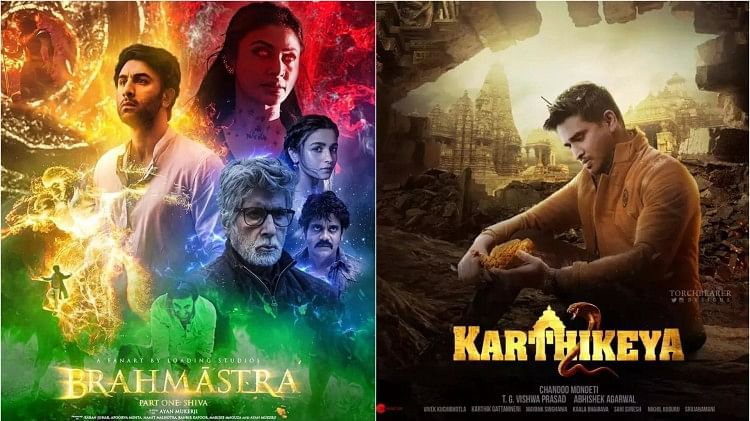 These days Ranbir Kapoor and Alia Bhatt’s film ‘Brahmastra Part One Shiva’ is earning tremendously at the box office. More than a week has passed since the release of the film and still its earning is continuing. At the same time, apart from this, small budget films of South are also made in theatres, which ‘Brahmastra’ is giving a tough competition. Saturday’s earnings figures have also come out, so let’s know which film earned how much at the box office.

Directed by Ayan Mukerji, ‘Brahmastra’ depicts the world of weapons. The film has been earning well at the box office from day one. Although there was some decrease in the film’s earnings after the first weekend, but now again the film seems to be getting the benefit of the weekend. The film’s earnings were 10.6 crores on Friday, so on Saturday i.e. on the ninth day, there was a collection of 15.50 crores. In such a situation, the net collection of the film has crossed Rs 199.32 crore and the gross collection has crossed Rs 200 crore.

Nikhil Siddhartha and Anupama Parameswaran’s mythological drama ‘Karthikeya 2’ is being liked by not only Telugu but Hindi audience too. Directed by Chandu Mondeti, the film was made at a cost of 30 crores. The film had a collection of just Rs 7 lakh on the first day in Hindi, which is seeing an increase day by day. The film earned 5.75 crores in the first week at the Hindi box office, which has now gone up to 30.55 crores after five weeks.

Dulquer Salmaan and Mrunal Thakur’s Telugu film ‘Sita Ramam’ has received immense love from the audience. After getting success in the South, the film was dubbed and released in Hindi on 2 September. Made at a cost of 30 crores, this film has already joined the 100 crore club. At the same time, now it is also streaming on Amazon Prime.

Chiyan Vikram’s film ‘Cobra’ stars Srinidhi Shetty and former cricketer Irfan Pathan in the lead roles. After the release of the trailer of ‘Cobra’, it got a tremendous response and on the opening day itself, the film started with a collection of 17.45 crores, but after that the film’s earnings declined. Chiyan Vikram, who appeared in 25 different avatars in the film made at a cost of 100 crores, also could not succeed in bringing the audience to the theatre.