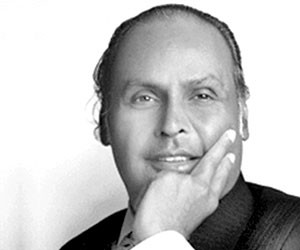 If you do not believe in fairy tales, then you must read this story. This is nothing less than a fairy tale. A man who could not even complete his high school education. He was from such a poor family that he had to work from his teenage years, from selling breakfast to filling oil at the petrol pump to meet the expenses. When such a boy said goodbye to the world as an old man, the value of his property was more than 62 thousand crore rupees. If you still do not recognize this personality, then we are talking about Dhirubhai Ambani. Such a successful face who gave hope to every poor, that money is not required to be successful. Success comes to those who take risks for it. Dhirubhai proved time and again that taking risks is not the mantra of business to grow.

Dhirajlal Hiralal Ambani was born on 28 December 1932 in Chorwad, a small village in Junagadh, Gujarat. Father Gordhanbhai Ambani was a teacher. Mata Jamnaben was a simple housewife. Dhirubhai had four other brothers and sisters. Taking up such a large family was not an easy task for teacher Gordhanbhai. There came a time that due to financial troubles, Dhirubhai had to leave his studies in the middle and his schooling remained incomplete. To help his father, Dhirubhai started doing odd jobs.

The example that behind every success is hidden many failures, Dhirubhai Ambani is quite right. After leaving his studies, Dhirubhai first started selling fruits and snacks, but to no avail. He brainwashed and started selling pakoras in Girnar, a religious tourist spot near the village. This work was completely dependent on the visiting tourists, which was good at some times of the year, at other times there was no significant benefit in it. Dhirubhai also stopped this work after some time. After the first two failures in business, his father advised him to take up a job.

Business even while on the job

Dhirubhai’s elder brother Ramnik Bhai used to work in Yemen in those days. With his help, Dhirubhai also got a chance to go to Yemen. There he started a job at the petrol pump of Shell Company and in just two years, due to his qualifications, reached the post of manager. Even during this job, his mind was less towards it and more towards opportunities to do business. He considered every possibility in that time that how he can become a successful business man. Two small incidents speak of his passion for business.

Both these incidents are from the time when he was serving in a shell company. Where he used to work, the workers working there used to get tea for just 25 paise, but Dhirubhai used to go to a big hotel nearby for tea, where he had to pay Re 1 for tea. When he was asked the reason for this, he told that big businessmen come to him in big hotels and talk about business. I go to listen to them only so that I can understand the nuances of business. Dhirubhai took business management education in his own way. Who later hired a degree holder in the traditional way from Whatern and Howard.

Similarly, the second incident indicates his keen eye and ability to seize opportunities. It happened that in those days silver coins were in circulation in Yemen. Dhirubhai realized that the silver value of these coins was more than the value of the coins and started supplying these coins to a London company by melting them. By the time the government of Yemen came to know about this, they had made huge profits. Both these incidents were indicating that Dhirubhai Ambani has all the qualities to become a successful businessman.

Dhirubhai’s time was passing in Yemen that the fight for independence started there and many Indians had to leave Yemen. Due to this trouble, Dhirubhai also had to leave Yemen. God started creating conditions to make him a successful businessman. After leaving this job, he decided to do business instead of job, but money was needed to start the business. Dhirubhai did not have a huge amount to invest, so he started the business of spices and sugar with his maternal uncle Trimbaklal Damani. This is where the foundation of Reliance Commercial Corporation was laid. After this Reliance entered the business of yarn. Here too success kissed Dhirubhai’s feet and soon he became the director of the Bombay Yat Vyapari Sangh. This business was full of risks and his maternal uncle did not like risk, so soon both of them parted ways. This did not make any difference to Reliance and in 1966 Reliance Textiles came into existence. In the same year, Reliance established a textile mill at Naroda, Ahmedabad. The branding of Vimal was done in such a way that soon it became household name and Vimal’s cloth became a big Indian name. Vimal was actually the name of his elder brother Ramnik Lal’s son. In the midst of all these struggles, he was married to Kokilaben with whom he had two sons Mukesh and Anil and two daughters Deepti and Neena. He never looked back after this and became India’s largest company with companies like Reliance Textiles as well as Petroleum and Telecom.

In the midst of all this, Dhirubhai Ambani was also accused of influencing the policies of the government and making profit from the shortcomings of the policies. A lot was also written on the business tussle between him and Nusli Wadia. Inspired by his life, a film Guru was made in which Abhishek Bachchan played his role. His health deteriorated amid growing business and he died on 6 July 2002. After his death, his work was given to the elder son. Mukesh Ambani handled by.