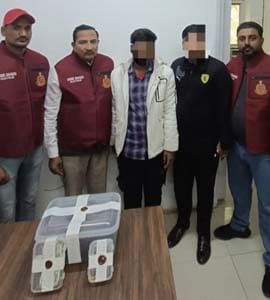 Three suspects, including a minor, have been identified.

Delhi The Police Crime Branch has busted a gang that used to steal jewelry and cash from children in Delhi and NCR. This gang is from Madhya Pradesh and these people used to take children from 3 villages of Madhya Pradesh on contract for theft. According to the police, the people of the gang used to give 10 to 12 lakh rupees to the families of the children for one year and then used to steal from the children in marriages throughout the year. According to Crime Branch’s Special CP Ravindra Yadav, a gang was active in Delhi and NCR, which was stealing omens, jewelry and cash bags at weddings. To catch this gang, a team was formed under the supervision of Crime Branch Inspector Dalip Kumar and ACP Sushil Kumar. The crime branch team started analyzing all available video footage of wedding ceremonies and deployed informers in big banquet halls, farm houses.

On analysis of CCTV footage and video recordings of wedding ceremonies, three suspects including a minor were identified. Video footage revealed that the suspects spent considerable time at the venues and mingled with guests before committing the thefts. Then they used to eat food at the wedding ceremony comfortably and as soon as they got a chance, they used to steal a bag full of jewelry or cash and disappear.

The police team identified the accused through electronic surveillance and 3 people including a minor were arrested. During interrogation, the accused disclosed that they were residents of Gulkhedi, Kadiya, a small village in Rajgarh district of Madhya Pradesh. In the wedding season, they move to Delhi and other metro cities of NCR and North India to commit thefts at wedding venues during wedding ceremonies. The gang leader further disclosed that they used to trap the parents of 9 to 15 year old children in their village on the pretext of giving them Rs 10 – 12 lakh for a year. Once the deal was finalized, the money was handed over to the parents in two or more installments and the child was kept for theft for a year.

After being brought to Delhi, the children were given theft training for a month on how to steal at weddings and how to mingle with people at the venue. The children are also made mentally and physically strong so that they cannot reveal their identity and that of their gang members in case they are caught. Used to teach children to wear good clothes and eat manners to participate in marriage ceremony. The gang also comprises men and women, who usually live in rented houses and drop off children at gatherings

The women used to take care of them like their own children and the real parents of the children were informed about the children every day. Among those caught are 24 year old Sonu, 22 year old Kishan and a minor. All are residents of Madhya Pradesh Rajgarh, the accused have been involved in many incidents in the past as well.

Bilawal Bhutto said, me and my team “work like a donkey” day and night