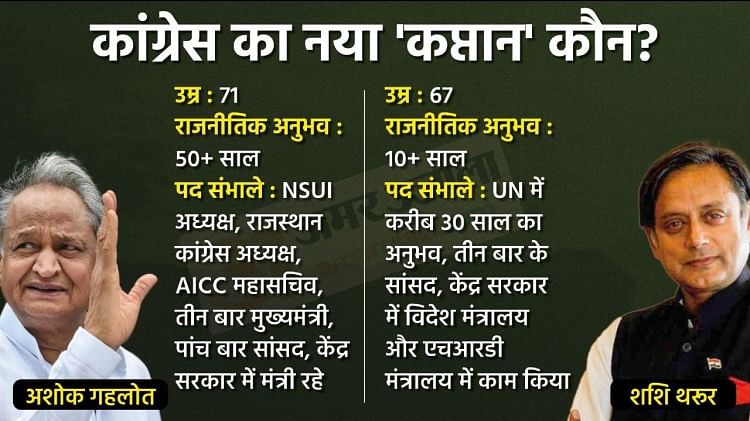 The process of election for the post of Congress President has started. The chances of Rahul Gandhi filing his nomination for the post of President on October 17 are slim. However, the market of speculation about the candidature of some more leaders is hot. Regarding the two Congress leaders, there is every possibility that they can stand in the race for the post of president. One name is of Rajasthan Chief Minister Ashok Gehlot, the other name is Shashi Tharoor, who is the party’s MP from Thiruvananthapuram in Kerala.

In such a situation, a question is, what is the opinion of Gehlot and Tharoor for the post of Congress President? How much power is there in both of their names? What are the chances of both becoming president? Which leader has support behind Gehlot and Tharoor? Apart from this, who are the leaders on whose behalf the candidature for the post of Congress President can be presented? Let’s know…

Tharoor vs Gehlot: How did the discussion on names start?


Apart from the Gandhi family in the Congress, Shashi Tharoor was the first to present his claim. According to reports, Tharoor met Congress interim president Sonia Gandhi on Monday and expressed her intention to stand for the post of president. According to the news agency, Sonia Gandhi had told Tharoor that she would be completely neutral in these elections.

Now let’s talk about Shashi Tharoor’s candidature. Shashi Tharoor, who was a member of the Congress’s G-23 group, has also been a diplomat earlier and has also contested for the post of UN Secretary General. Speculation about his candidature got a boost when Tharoor, in a tweet, endorsed a letter from young Congress members demanding reforms in the party. The petition, supported by Tharoor, appealed to those running for the post of president to include members of the block committees of the Congress in the Congress Working Committee (CWC).


The speculation of Ashok Gehlot contesting the elections has also been doing the rounds for a long time. However, the talk of him contesting for the post of Congress President became clear from some incidents in the recent past. Reports first surfaced in August that Sonia Gandhi had met Gehlot and asked the 71-year-old leader to lead the party. However, Gehlot then denied such reports and said that the party high command has already given him responsibilities and he will not compromise on those responsibilities while in Rajasthan.

It is said that initially Gehlot avoided presenting the candidature for the post of president and kept making statements in favor of fielding Rahul Gandhi. However, this week in Rajasthan, he held one-on-one meeting with MLAs, which almost ensured that Gehlot is engaged in discussions to find his successor in Rajasthan.

How different are the two leaders in travel, experience and influence?

Both Ashok Gehlot and Shashi Tharoor are senior leaders of the party. However, the journey, experience and influence of both of them in the party have been quite different. Where Ashok Gehlot has come up in Congress for five decades, climbing stairs one after the other. At the same time, Tharoor was an early diplomat, writer and has worked with the United Nations for three decades. It was during this period that he also entered the Congress. However, Tharoor also has more than a decade of experience in the party.

Ashok Gehlot apparently has more experience working in the organization than Shashi Tharoor. He has been a seasoned player of politics, who is closely aware of the working style of Congress. Gehlot started with the student wing of Congress – NSUI. After this, he also held the post of party general secretary during the Congress government at the Centre. Gehlot has held the post of Rajasthan Congress President and has also been in charge of several states. Before KC Venugopal, he was the general secretary of the organization. Apart from this, Gehlot also brings with him the experience of being Chief Minister thrice. Not only this, he is also a five-time Lok Sabha MP.