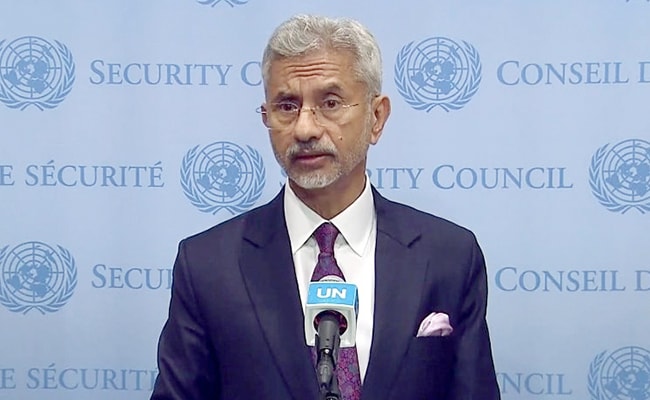 Rejecting Congress leader Rahul Gandhi’s criticism of the government over the border dispute with China, External Affairs Minister S Jaishankar on Monday said the Indian Army will not “unilaterally” change the status quo on the Line of Actual Control (LAC) with China. Will give Jaishankar said that the army was deployed on the orders of Prime Minister Narendra Modi and the army did not go to the border area because Gandhi had told him to do so. Jaishankar said, “Today there is deployment of Indian Army on the border of China, which was never there before.

This has been done to counter the troop deployment by China, which has been increased extensively since 2020. Jaishankar was answering a question during India Today magazine’s ‘India-Japan Conclave’. Were. Responding to Gandhi’s allegations, Jaishankar said, “If we deny then how is the army there? The army did not go there because Rahul Gandhi had asked them to go. The army went there because the Prime Minister of India ordered them to go.” Gandhi alleged that the government was hiding the fact that China had encroached on Indian territory along the LAC. There was a clash between Indian and Chinese soldiers on December 9 in the Yangtse area of ​​Tawang sector of Arunachal Pradesh. The incident took place amid the ongoing border standoff in eastern Ladakh for more than 30 months.

The Foreign Minister said, “People will say things, they cannot be credible, they can sometimes contradict their own stand, their behaviour. All this can happen. But the fact remains that the Indian Army is deployed today to counter any attempt to unilaterally change the LAC. The Foreign Minister said, “I am saying that it is the responsibility of the nation and it is the duty and commitment of the Indian Army that we will not allow any country and in this case China to unilaterally change the LAC.”

Jaishankar said, “I think it is very clear and most people in the country see it. You can make your own perspective on the controversy. I think people will consider it politics.” Asked about Delhi Chief Minister Arvind Kejriwal’s criticism of the government for increasing trade with China despite the border dispute, Jaishankar said India should continue importing from that country. This is because the manufacturing sector was not given enough attention in the past. Jaishankar said that even after India opened up its economy in 1991, not much attention was paid to the micro, small and medium enterprises (MSME) sector and building supply chains. Went. Jaishankar said, “When someone says why imports are happening from China, it is happening because for 30 years you did not give the kind of support and protection to your industry, which it should have got.”

He said, “In recent years you have started doing it. What you have done in 30 years, you cannot change in five or 10 years.” At the conclave, Jaishankar mentioned 12 points about India-Japan relations and said that the two countries have a “positive history”. Japan is regarded as a model of harmony of modernity and tradition in India, there is a strong national consensus in India on developing relations with that country, he said. . The Foreign Minister said, “Traditionally, it was an economic relationship. In the past, global strategy had little impact on India-Japan relations.” Jaishankar said Japan has been a “catalyst of change” and cited Maruti’s contribution to lifestyle changes and ease of urbanization with the metro network. . He said that big changes will come from the bullet train. He said that the synergy between India and Japan in the maritime domain is particularly strong and will grow further in the years to come.