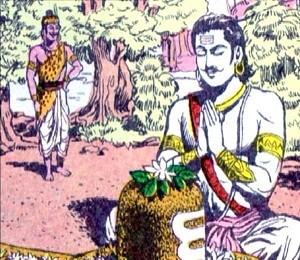 Arjun During Vanvas and Subhadra Vivah Mahabharat Arjuna is the hero of the Hindu mythology Mahabharata, and has also played an important role in the Bhagavad Gita along with Lord Krishna. He is the third of the famous five Pandavas, he is also called the world’s best archer. According to the legend of Mahabharata, when Arjuna was in exile for 12 years, during that time he had 3 marriages. The first Ulupi was a snake girl. The second Chitrangada was the daughter of Chitravahana, the king of Manipur, and the third and last was Subhadra, who was the sister of Lord Krishna. In fact, Arjuna was exiled for 12 years due to violation of the rule, during which he started living on pilgrimage sites. During that time he had 3 marriages. In this article, the story of Arjun’s exile and the story of his marriage during that time has been told.

Introduction of Arjun (Arjun in Mahabharat) –

The complete introduction of Arjuna is shown in the following table-

Arjun was born in the royal family of Hastinapur. His father was Pandu, the brother of King Dhritarashtra of Hastinapur and his mother was his first wife, Kunti. Mother Kunti had a boon that she would get a son from the God whom she would worship. Mother Kunti worshiped Lord Indra from which she attained Arjuna. Thus Arjuna’s godfather is called Indra. Apart from this, he is the third of the five Pandavas. Guru Dronacharya ji gave archery knowledge to Arjuna and he gave Arjuna the title of one of the best archers. Since then Arjuna started being called the world’s best archer.

He received a weapon from Lord Indra named Gandiva. Arjuna fulfilled the swayamvara condition of aiming the fish in the eye placed by Draupadi’s father in Draupadi’s swayamvara, and Arjuna won the swayamvara condition and married Draupadi. Draupadi’s Swayamvar Read about in detail here. Apart from this, Arjun had 3 more marriages which were with Ulupi, Chitrangada and Subhadra. From all these wives, Arjuna also got 1 sons. Arjuna’s sons were Srutakarma, Babruvahana, Iravan and Abhimanyu. Of these, Srutakarma and Abhimanyu died during the war of Mahabharata. Arjuna had a deep friendship with Shri Krishna. He also gave knowledge of Bhagavad Gita to Arjuna, and in the war of Mahabharata, he also guided Arjuna by becoming his charioteer and thus Arjuna became victorious in the war of Mahabharata.

According to the story of Mahabharata, there comes an incident when Arjuna is in exile. Once upon a time, when the Pandavas had returned to Indraprastha after marrying Draupadi. The Pandavas had immense love for each other. One day the five Pandavas were sitting in the palace, when Naradji appeared there and the Pandavas honored him. Draupadi was also present there, she also took blessings from Naradji and left from there. As soon as they left, Naradji narrated a story to the Pandavas, that was –

“It is a matter of many years ago that there were two demons named Sunda and Asund, both of them had a lot of love, people used to say that they are two bodies and one soul. Once both of them were doing penance for Brahma ji. Then Brahma ji appeared and started asking both of them to ask for a boon. They asked for a boon from Brahma ji to be immortal, but Brahma ji said that this boon is only for the gods, then both of them asked such a boon from Brahma ji that both of those brothers could die at the hands of each other and someone else could give them a boon. could not kill. Both those brothers after receiving this boon started spreading terror in the whole creation, then the gods requested Brahma ji to protect them. Brahma ji told Vishwakarma ji that you should create such a beautiful woman, so that the whole creation would be fascinated by her. Vishwakarma ji created a woman named Tilotma, who was very beautiful. Both Sund and Asunda brothers were fascinated by her and because of finding that woman in both of them, war started and both of them died.

Narrating this story, Naradji told Yudhishthira that – “Dear Yudhishthira, you are five brothers and Queen Draupadi is the wife of all five brothers, in such a situation, a woman can make a war between brothers, so why don’t you have a rule to stay with Queen Draupadi. would tie it up, and whoever violates this rule will be given a 12-year exile as a punishment, so that there will never be a fight between you because of a woman. Saying this Naradji left from there. As soon as he left, the five Pandavas accepted his opinion and they made it a rule to stay with Draupadi.

After this, once some robbers snatched the cow of a Brahmin and they started running away with it, then that Brahmin came and narrated his sorrow in front of Arjuna and said that there has been a robbery in your kingdom, will you not listen to my request. Then Arjuna said to that brahmin, just wait, I will come. At that time Arjuna’s Gandiva was kept in the room in which Yudhishthira and Draupadi were together. A confused situation arose in front of Arjuna. On one hand the rule was to be followed and on the other hand it had to fulfill its duty. Then Arjuna decided that he would fulfill his duty and he would also accept the punishment for breaking the rules. Arjuna went to Yudhishthira’s room and took Gandiva and smashed those robbers with his arrows, and the Brahmin got his cow back.

Arjuna came back and asked King Yudhishthira to go to exile for 12 years. Then Yudhishthira said – “If the younger brother comes to the elder brother’s room, it is not a crime, it is forgivable, but if the elder brother goes to the younger brother’s room, it is a crime. That’s why you don’t deserve the crime.” Arjun said that – “Crime is a crime, there is no question of younger or elder brother, you allow me to go into exile”. Thus Arjuna had to undergo the punishment of 12 years of exile.

When Arjun was in exile, he started living in different places of pilgrimage. Once when he was walking in the forest, a beautiful woman was fascinated by Arjuna. Her name was Ulupi, in fact she was a serpent, who was the daughter of Kaurvya, the king of serpents, and lived in her kingdom Hades. On the second day when Arjuna was taking a bath in the Ganges river, Ulupi came there in his serpent form and went inside the river and dragged Arjuna’s feet and took him to Hades. After reaching there, she proposed marriage to Arjuna, and said that if he does not marry her, she will give her life. Arjuna then accepted the proposal to marry Ulupi and they got married. He also got a son named Iraavan from him. Arjun told Ulupi that I cannot take you to my kingdom. Arjuna had said this because Draupadi had said that whoever the Pandavas would marry other than Draupadi, they would not live with her. Ulupi obeyed Arjuna and granted Arjuna a boon that no water creature could kill him. After this Arjuna left from there.

Arjuna reached Manipur during his 12 years of exile. There he met Chitrangada. Chitrangada was the daughter of Chitravahana, the king of Manipur, when she saw Arjuna, she expressed her desire to marry him, Arjuna also agreed to marry her. But King Chitravahan had a condition that the son who would be his daughter would stay with him in Manipur. Chitravahana wanted this because he did not have any son and if his daughter had got married, then she too would have gone to her in-laws’ house, her lineage could never progress. Arjuna accepted this. After that Arjun married Chitrangada and got a son from her, who was named Babruvahan and he stayed with his maternal grandfather in Manipur, and after that Arjun also left from there.

Marriage of Arjun with Subhadra (Arjun and Subhadra Vivah story) –

Arjuna was on a pilgrimage during his exile and he reached Dwarka, which was the city of Arjuna’s friend Shri Krishna. Upon reaching there, he received the news that Balarama was getting his sister Subhadra married to Duryodhana, the prince of Hastinapur. Sri Krishna did not agree with this. Arjun arrived there in the form of Tridandi Vaishnava, he was sitting outside the temple there. At that time Balramji took him to his palace to feed him and treated him with great respect, at that time he could not recognize Arjuna in that disguise. There Arjuna saw Subhadra and was fascinated by her beauty. Subhadra also wanted to marry Arjuna, she loved him since childhood.

This is what Shri Krishna also wanted, he had recognized Arjuna. He went to Arjuna and he advised Arjuna to drive away Subhadra. One day Subhadra was going on her chariot to a fort in Dwarka, when Arjuna decided to abduct her and took away Subhadra from there with the permission of Shri Krishna. When Balramji got this information, then he was very angry with this, but Shri Krishna explained to him a lot and he agreed to the marriage of Arjuna and Subhadra and gave him a lot of money, chariots, horses, elephants and servants in dowry. lamps. Thus the marriage of Arjuna and Subhadra was completed.