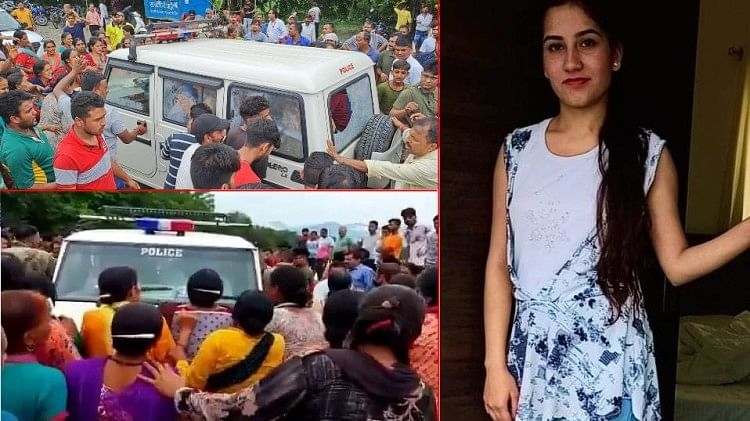 In Rishikesh, the angry people of Ganga Bhogpur stopped the jeep going to Kotdwar court carrying the accused of Ankita murder case. People broke the glass panes of the jeep, tore the clothes of the accused and beat them up. Not only this, people also tried to overturn the car. After about 45 minutes, ASP Shekhar Suyal reached the spot and lathi-charged the crowd and drove them away from the spot.

The police team from Laxmanjhula police station was going to present the accused in Kotdwar court. During this, someone informed the people in Ganga Bhogpur that the accused were being taken from the banks of the canal. Along with the local people, leaders of various political parties and social workers were already angry about the incident.

As they got the information that about 300 people including women and children started walking straight from Vanantra Resort towards the canal road. People stopped the police jeep coming from the front. Women and children started pelting stones at the jeep. Meanwhile, people broke the glass of the police jeep with stones. People also tried to overturn the jeep and drop it in the canal, but they could not succeed.

Meanwhile, people tore the clothes of the accused from the window of the jeep and then started throwing kicks, punches, slippers and stones at them. After about 45 minutes on the information of the police, ASP Shekhar Suyal reached the spot. He was accompanied by the force of Devprayag police station. Shekhar Suyal explained to the people, when he did not agree, he lathi-charged the people. People also pelted stones at the police, in which several policemen were injured. But finally the police chased the people away from the spot. After this the jeep was sent towards Kotdwar.

Let us inform that the police have arrested three accused including the son of the former minister of state for the murder of missing girl Ankita Bhandari. During the interrogation of the police, the three accused have confessed to pushing Ankita into the Chila Shakti canal after the dispute. At the same time, the SDRF could not get any information about the girl due to increasing water in the canal. Earlier, to mislead the police, the accused had lodged a missing report saying that the girl was missing from the resort.

On Friday, ASP Kotdwar Shekhar Suyal disclosed the Ankita murder case. ASP said that on September 18, Ankita Bhandari (19), a resident of Srikot village of Nandalsun Patti in Pauri Garhwal, who worked as a receptionist at Vanantra Resort, went missing under suspicious circumstances. Resort owner Pulkit Arya had lodged a missing report of the girl.

Told that on September 22, the case was transferred from the revenue police to the Laxmanjhula police station. The operator of Vanantra Resort and both the managers said that Ankita disappeared from her room. While the employees told during interrogation that Ankita had gone out with the operator and managers on the night of the disappearance but did not return.

The ASP said that the police arrested the resort operator Pulkit Arya, resident of indigenous pharmacy of Aryanagar, Haridwar, manager Ankit alias Pulkit Gupta, resident of Dayanand Nagari of Jwalapur, and manager Saurabh Bhaskar, resident of Surajnagar of Jwalapur. The accused told that all three of them had come to the barrage with Ankita.