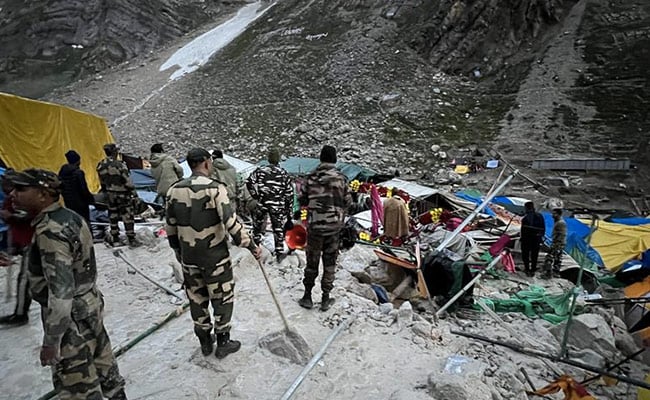 In this season every year in Jammu and Kashmir Pilgrimage to Amarnaath Travelers going on the road are once again facing natural calamity. Friday evening near Amarnath cave cloud burstAfter which there is devastation here. So far 16 people have died in this accident. Seven of the dead are women. 65 people have been injured, while about 40 people are missing. It has been raining continuously since the accident. Fortunately, the reporting team of NDTV avoided becoming a victim of this accident. Our reporters and camerapersons narrowly escaped the accident and are now safe.

In fact, reporter Sharad Sharma told that he and his colleague cameraperson Ashwini Mehra were at the same place a few hours before the accident, where there was chaos after the cloudburst. That is, those people escaped with a difference of a few hours.

NDTV team is covering Amarnath Yatra. The reporting team was near the holy Amarnath cave on Friday afternoon. He stayed there for about 24 hours. He saw Baba Barfani there and got down from there via Baltal in the afternoon.

As soon as they reached down, after a while the news came that the cloud had burst near the cave. There were tents for devotees, shops were there, langars were running, but after the cloud burst everything that came in the way of the water got washed away.

“People were floating in the water…”, the pilgrims who returned safely from the Amarnath cave narrated their painful experiences

So far 16 people have died in this incident. Dozens are still missing. Rescue operation is going on. Army is engaged in rescue work.

Till the report came, the reporting team of NDTV was at Baltal Base Hospital, where those injured in the accident are being brought. However, seriously injured people are being sent to Srinagar.

At least 15,000 pilgrims, who were stranded due to flash floods triggered by a cloudburst, have been shifted to the lower base camp Panjtarni here. A small BSF team is also deployed at the Neelgrath helipad to assist the pilgrims coming from the holy cave.