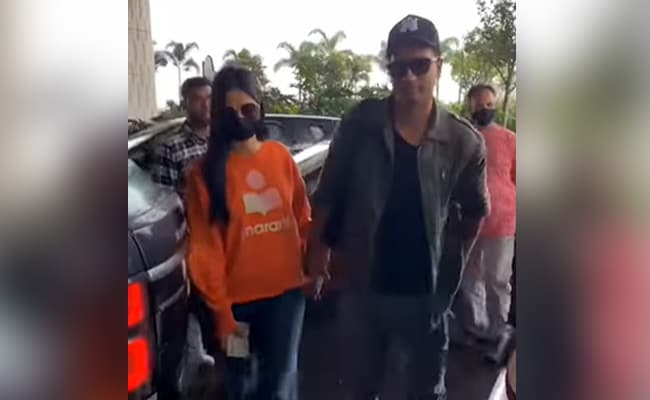 Katrina to celebrate first birthday after marriage with Vicky in Maldives

His fans are desperate to see Bollywood’s most charming couple i.e. handsome hunk Vicky Kaushal and beautiful Katrina Kaif together. The pictures of this couple often go viral on social media, with their romantic style, these couples are seen giving goals. At the same time, once again this pair was spotted holding each other’s hands at the airport. On Saturday, July 16, Katrina is going to celebrate her 39th birthday, Vicky and Katrina have left for Maldives to celebrate the occasion.

Come hand in hand and be seen at the airport
In the video shared on Instagram, Katrina Kaif and Vicky Kaushal are seen getting down from their car and heading towards the airport, during which both are seen holding each other’s hands. Talking about the looks, Katrina is seen in a casual look wearing wide leg jeans with orange color sweat shirt. On the other hand, Vicky is wearing a green shirt and gray pants over a black T-shirt, with this he has completed his airport look by putting a cap on his head. This is Katrina’s first birthday after marriage, so Vicky is taking her to Maldives to make this special even more special.

Katrina-Vicky’s pictures are often viral
Let us tell you that on December 9 last year, Katrina and Vicky Kaushal got married in a royal style. The beautiful pictures of the wedding of these two became very viral on social media, while this couple is often shadowed on social media with their romantic pictures. On the work front, Katrina Kaif is going to be seen in ‘Tiger 3’ very soon, while Vicky Kaushal has completed the shooting of his upcoming film with actress Sara Ali Khan.