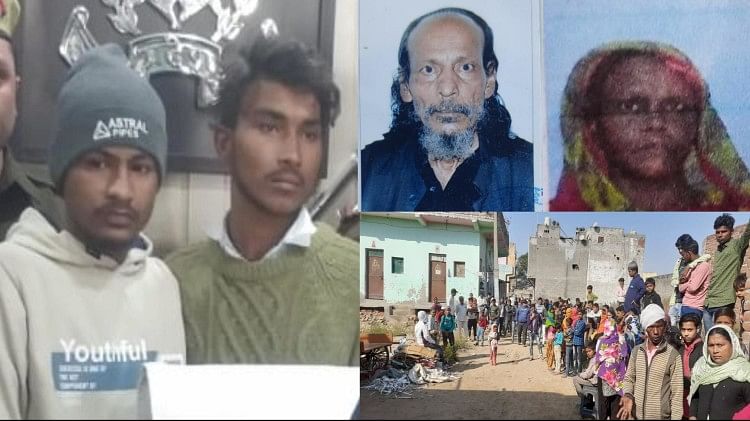 Scrap dealer Ibrahim (62) and his wife Hajra (58) were murdered by four scrap dealers for looting Rs 54,000 on the night of November 22 in Daulatnagar Colony, Loni, Ghaziabad. One in four is a 12-year-old child. He had woven the fabric of the conspiracy of the incident. Making this shocking disclosure, the police arrested three including the child. For 25 days, the police was assuming that someone close to the couple was involved in the double murder, but even after questioning 12 people, no clue was found. After this the neighbor of the couple told about the child. The case opened as soon as he was interrogated. DCP Dr. Eraj Raja told that after getting very accurate information, the first child was caught. After this, Manjesh resident of Asra-2 Awas Vikas, Shubham alias Shivam resident of Nishant Colony, who was with him in the incident, was arrested.

His partner Sandeep resident of Silver City, Tronica City is absconding. Police have recovered about Rs 12000, mobile and neck chain from the possession of the accused. Rs 70,000, mobile phones and jewelery were looted from the couple’s house. The couple’s daughter Rahima and her six children were present in the house at the time of the incident. He said that he did not come to know about it during the incident.

The accused told during interrogation that they reached Ibrahim’s house at five in the morning as part of a conspiracy. The child called at his door. But not Ibrahim, his wife Hajra came to open the door. The child said that he has come to sell junk. On this Hajra went inside to get the scales. Then the child and the other three people entered inside. They strangulated Hajra to death. After this, went to the room and killed Ibrahim by strangulation and then ran away after looting the room.

Neighbors suspected due to crocodile tears of the child


Several days after the double murder, a 12-year-old child arrived at the couple’s home. He wept bitterly. Seeing tears in his eyes, not only the family members of the couple, even the neighbors were shocked because the child was neither close to the family nor a relative.

He was saying in a loud voice, now to whom will I sell the bars. Only then a neighbor recognized him. He told the police that this child, who is pretending to cry, had come to Ibrahim two-three days before the incident and had sold junk.